Track of the Week: The Rolling Stones, "Start Me Up" 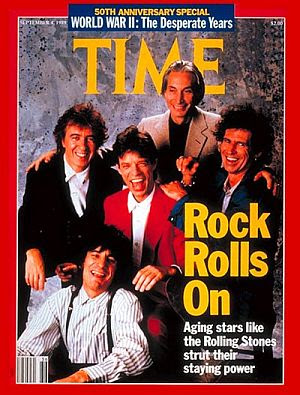 When I first heard popular music, it was the 70s soft rock and crossover country tapes we had at home: John Denver, Kenny Rogers, The Carpenters, and Tony Orlando.  It was in the early 80s that I first became aware of what was on the radio, and began to know what the hits of the day were.  The first song I ever remember digging through the radio was "Centerfold" by the J. Geils Band.  I seemed to hear it every day on the radio on my way to school in kindergarten (which jives with the fact that it hit #1 in February of 1982.)

Of course, I had no idea of what the song was about, I just loved the catchy riff and the bright organ, an instrument for which I still have an inordinate affection.  Back then I also assumed that all the songs I heard on the radio were by new artists.  Around the same time, when I heard "Start Me Up," I thought the Rolling Stones were just as young and fresh faced as Rick Springfield or Duran Duran, and had no clue of their past.  After all, my older cousin had "Start Me Up" on 45, just as she had Bow Wow Wow and Billy Idol.  I always liked the song, which I thought of as the "make a grown man cry" song.

By the mid-1980s I saw the video for "Start Me Up," and found out that these guys were OLD.  (They were about my age now in that video.  Eek!)  It was kinda puzzling, like when I saw Bob Dylan singing in the "We Are The World Video" and thought "who is that weirdo croaking, I want more Lionel Richie."  It was perhaps my enthusiastic embrace of the Monkees and their 1986 reunion that made me aware that there was plenty of older music that I actually liked just as much as the stuff coming out of the local hits station.

Little did I know then that I had been just old enough to witness the Stones' last great single in its natural habitat, Top 40 radio (classic rock radio is more like a zoo than the wild.)  In 1981, when it hit #2, the Stones had been together for 19 years, churned out several hits, and sold out arenas under the braggadocios banner of being "the greatest rock band in the world."  Like I said, I thought they were pretty old and crusty at that point, but they've been together another 33 years, and while they still sell out stadiums, the Stones have not produced a single hit that any of their fans would elevate to the canon.  Every few years they put out another album that their fans optimistically call "the best since Tattoo You", the record that spawned "Start Me Up."  That's telling, since everyone seems to acknowledge that "Start Me Up" still hasn't been topped, and it doesn't look like it ever will be.

This begs the question, what makes "Start Me Up" so great, anyway?  I would point to the groove.  After Exile on Main Street in 1972 the Stones put out a lot of mediocre material (1978's Some Girls being the major exception), much of the mediocrity easily attributable to Keith Richards' drug use.  (Their suckitude since his cleaning up is mostly the fault of Jagger's heart not being in it, IMHO.)  That said, while the songs sucked, many of them had some seriously funky grooves.  (The idiotic yet danceable "Emotional Rescue" is a prime example.)  It's as if the band finally mastered rhythm, but lost everything else.  Someway, somehow, the old standard of songwriting actually got molded to the groove on "Start Me Up," a song that is irresistible both for dancing and singing along to.  It is their one last bright shining moment as group, and even if they've been milking their former glory for over three decades, songs like "Start Me Up" are the reason why they can get away with it.
Posted by Werner Herzog's Bear at 6:26 PM

Email ThisBlogThis!Share to TwitterShare to FacebookShare to Pinterest
Labels: music, Rolling Stones, track of the week