David Bowie and Iggy Pop in Berlin (a playlist) 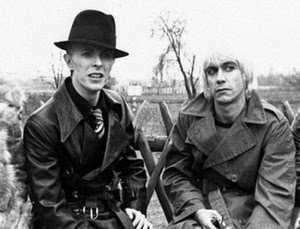 Last Friday when we got eight inches of snow dumped on us I had to do my duty as a new homeowner and start shoveling.  Our extra-wide driveway suddenly began to look a lot less attractive.  I made a playlist to listen to while I worked consisting of the albums that David Bowie and Iggy Pop cut in Berlin in the late 1970s, and it was perfect.  I spent two hours busting my hump, but the time passed pretty fast due to re-immersing myself in music that I had let slip from my ears for far too long.

The albums in question are Low, Heroes, and Lodger by Bowie, and The Idiot and Lust for Life by Pop.  Each is a masterpiece in its own right, but together they form a distinctive corpus of work that sounds like nothing else.  Here, in my own idiosyncratic order, are five of my favorite tracks, one per album.

Iggy Pop, "Sister Midnight"
This is the first song on The Idiot, and a statement of purpose.  The old Iggy Pop rocking out in front of the proto-punk riffage and caveman beats of The Stooges is gone.  The rhythm is angular and robotic, like a funk song run through Kraftwerk's computers.  The guitars are droning textures devoid of hooks.  Pop sings in a kind of quietly deranged way about Oedipal dreams and heroin addiction.  This is a man who has been to the brink and managed to come back and talk about it, but the damage is impossible to ignore.  The sound is completely arresting no matter how unsettling it is, and I have been listening to "Sister Midnight" over and over again for the past few days.  It's an uncanny sound that will give birth to some great music. For example, without this song there would be no Joy Division, a sadly ironic fact since Ian Curtis is said to have killed himself after listening to The Idiot.

David Bowie, "Boys Keep Swinging"
Lodger is the least dark of Bowie's Berlin albums, and one that points to his future after his Berlin phase.  (It's good, but my least favorite of the trilogy.)  Robert Fripp's guitars signal the heroics he will unleash on Scary Monsters, and "Boys Keep Swinging" has seeds of the popper sound Bowie would ride to world conquest in the early 1980s on Let's Dance.  Here in '79 he still retains some of the edge on a song that is one of the weirdest things I've spent a weekend humming to myself.

David Bowie, "Joe The Lion"
Heroes is justly best known for the anthemic title track, which is one of the few songs that have ever stopped me in my tracks the first time I heard it.  There's plenty of other good stuff on that record, however, with "Joe The Lion" running a close second in my book.  The guitars are overwhelming, putting the listener into the claustrophobic mind of the protagonist until they drop out and Bowie purrs irresistibly about the morning routine before the guitars jump back in with increased ferocity.  I've never been totally sure about what this song is about, but it replicates the feeling of going crazy from the boredom of daily like nothing else I've heard.

Iggy Pop, "Tonight"
Lust for Life is also best known for its stomping title track, but just about every song is killer.  My second favorite on the album is probably "Tonight," which starts with an operatic opening about a drug overdose that segues into a sweet mid tempo ballad backed by airy synthesizers.  It has the sophistication of art rock but drained of it pretensions, replaced by a hearty dose of Iggy's punk fervor.

David Bowie, "Warszawa"
The first side of Low is made up of electro-rock tracks reflecting the singer's state of mental breakdown.  The second side is something else entirely, a bunch of soundscapes midwifed by ambient master Brian Eno.  "Warszawa" is the best of them, and a song that to me is one of the most beautiful and haunting that I know.  Bowie is famously afraid of flying, and he spent some time on a train layover in a still war-damaged Warsaw , which generated the impressions that inspired this song.  I've always felt this song described a dark city where people are less living than waiting to die, and it speaks to the fear and dread often lingering just below the surface in our daily lives.  Not many rock songs ever speak to that.