In Praise of Frank Thomas 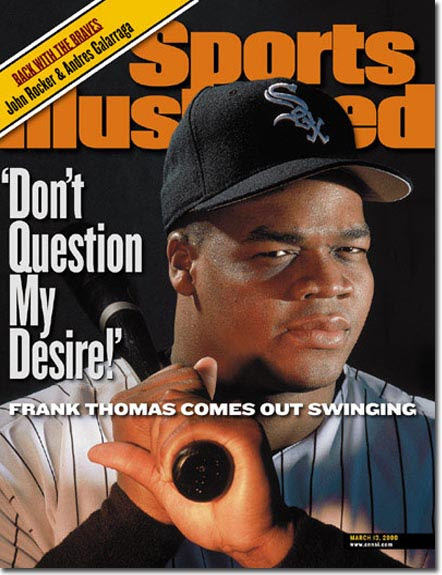 This year's baseball Hall of Fame class is particularly meaningful to me, because the three players inducted all started their careers after I had become a real student of the game.  In 1987 I watched Greg Maddux pitch his first games on WGN, and acquired his Topps Traded baseball card after the season was over.  I remember seeing Tom Glavine pitch as a rookie for the Braves on TBS in 1988 when he lost 17 games and I questioned whether he would ever measure up to his promise.  Most meaningfully, I saw Frank Thomas in the flesh several times while attending many games of my beloved White Sox in the years 2000-2005.

It is hard today to remember just how dominant and different Thomas was in his prime years from 1991 to 1997.  In the 80s, when I first started following baseball, the guys who put up big power numbers did not hit for average, since they were primarily  swinging for the fences.  When Andre Dawson hit 49 homers for the Cubs in 1987, he batted a merely respectable .287, and only walked 32 times.  That same year Mark McGwire hit 49 homers while hitting .289.  It simply did not seem possible to hit 40 home runs and bat .300.  Sure, there were guys like George Brett who were .300 hitters with power, but they could only get to 30 homers tops.

Thomas was not held down by these mere mortal constraints.  In his glorious 1991-1997 run he batted well over .300 every season, led the league in on base percentage four times, and hit 40 home runs three times.  He managed to get over 100 walks in every season from 1991 to 1998, despite the fact that his tall 6'5" body gave him a huge strike zone.  As big as that zone was, it was a brave pitcher who dared to give the Big Hurt something over the plate.  In fact, it was Thomas' exploits that first educated me to the power of getting on base.  I stopped judging players solely on their batting average, and paid attention to how much they walked and struck out after seeing what Frank Thomas could do.

I got to see how much he intimidated opposing pitchers first hand at my first Sox game in 2000.  When it was Thomas' turn to bat, the stadium PA played a snippet of the "Theme from Shaft," and I saw an impossibly large man step into the batter's box.  Thomas had had a couple of sub-par seasons (by his standards) in 1998 and 1999, but in the Sox's division winning season in 2000, the old Frank was back.  He had such a presence when he dug in, something I don't think I've seen in any other hitter, except maybe when I saw the roided-up Sosa and McGwire play in the late 90s.  He looked like he owned the plate, and was daring the pitcher to throw a strike at him.

Over time I also began to appreciate what Thomas did away from the diamond.  During his down years he unfairly caught a lot of flack from the Chicago press for being stand-offish and difficult, when in reality he was a strong, silent type who let his actions do the talking.  His leadership was of a quiet variety.  Had he been more brash and outgoing, Thomas would have been more of a household name.  However, that just wasn't his style, and I respect him for it.  He was by far the best hitter in the American League in the 1990s, but became such in the most low-key way possible.

Most importantly, he was one of the few players willing to blow the lid off of the PED scandal in baseball.  Thomas volunteered to testify before Congress, and urged testing.  After all, he had seemingly defied all the old limits for hitters, but now those limits were being shredded by 'roid poppers.  He had managed to accomplish what he did without resorting to such measures, and for that reason alone, we ought to praise Frank Thomas.
Posted by Werner Herzog's Bear at 5:47 PM