Top Ten Most Annoying Fashion Trends of the Oughties

It's hard to believe, but the first decade of the 21st century ended almost two years ago. It seems like only yesterday that I was getting annoyed with Y2K hysteria and wondering why I chose academia instead of getting in on the dot.com boom.    Even though decades are often a poor way to divide history, they do seem to provide a chronological framework for our cultural memories, both good and bad. There are plenty of bad fashion trends that we associate with their particular decades: leisure suits with the 70s, high water pants with the 80s, Zubaz with the 90s. Here are ten annoying and sometimes downright tasteless fashions that have bugged the shit out of me over the last decade.

Without a doubt, crocs are hands-down the ugliest footwear every concocted by mankind. They're just plain ugly, so ugly that I cannot put into words the way they make my eyes bleed. The fact that Dubya wears them ought to be proof enough of their utter shittiness.

This trend is much older than the oughties, but it seems to have become much more brazen and common in recent years. I don't know how many times I've had to see the underwear of my students in the last year, either from saggin' or unbelted low rise jeans (see #6); it ain't pleasant.  Since my privileged private school students enjoy letting it sag, it's safe to say that this fashion trend has lost its street cred. 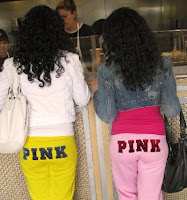 If the last decade will be remembered for anything in terms of fashion, it will be remembered as the era when notions of shame and dignity in public dress died. How else can we have a society where people go around with "pink" and "juicy" written on their asses? How long before I start seeing "insert cock here" embroidered on sweatpants? Like many of the worst fashion trends and other diseases, this one started with the sororities and infected everyone else.

Another sorority favorite, Uggs are unattractive in the extreme and are favored by young women who lack any sense of personal style and desperately want to conform. The name itself practically says "ugly," fer chrissakes!

From the sorostitutes we go to the frat morons. During the years of my time academia I kept seeing more and more "Irish" green tees on campus. They're usually worn by douches who drink Bud rather than Guinness and would find the works of Brendan Behan, James Joyce, and WB Yeats to be "faggy." On behalf of America I apologize to the people of Eire for how we've reduced your entire rich culture and history into a celebration of lewd drunkeness.

Theoretically, low-rise jeans are inoffensive. Theoretically, Glenn Beck is just a patriot who loves his country a little too much. Theories don't always work in practice. 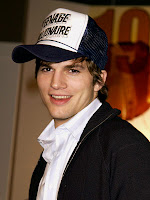 In my family there are men who've been wearing these caps for years in their capacity and truckers and farmers. Little did they know if they had worn their hats ironically instead for practical purposes they would be considered hipsters instead of hicks. The fact that Ashton Kutcher, perhaps the most annoying person in America not named Joe Lieberman, started this trend should be reason enought to hate it. 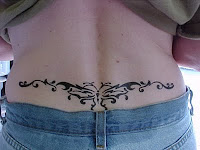 It seems that American society has already reacted strongly against the "tramp stamp," which unlike mom jeans and polyster pantsuits, lasts forever. I get the feeling that tattoo removal is about to become a big business. 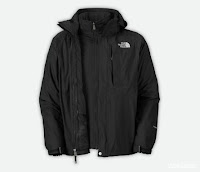 You often seen these paired with Uggs, and worn by the same kind of bland, entitled upper middle class preppies. This our generation's answer to the Member's Only jacket, and will be though to be just as stylish thirty years hence. 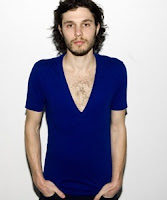 One recent hipsterish trend is the wearing of white v-neck tees as outwear. Now I have my share of v-necks, but they are worn underneath my dress shirts. Like most men my age, I'm rather hirsute, and the v-neck means a patch of exposed fur much denser than the one on display above. Please fashion industry, have pitty on us hairy-chested men.

Memo to flip-flop wearers: I don't want to see your calluses, corns, and ingrown toenails, or hear you fwapp-fwapping up the sidewalk. These are to be worn in the shower, not in public, 'nuff said.
Posted by Werner Herzog's Bear at 6:06 PM

I would add to this list just this one thing: Knit caps/slouches/berets worn with tank tops. If it is warm enough that you can't wear sleaves, then why are you upping the heat ante by putting wool on your head? I give a pass only to Rastafarians (anyway, their knit caps are generally made of hemp or cotton fiber).