A Lament for the Kansas City Royals 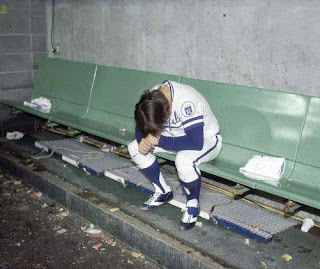 I have a confession to make: I am a baseball traitor who abandoned the team of his childhood.   Growing up in Nebraska, there were no major league teams in a state where college football is religion.  Coming of age in such a place meant that many kids followed pro sports as a whole, rather than their local team, and often chose a team to be theirs based on how good they were or how cool their uniforms were.  Proximity did count for something, however.  Kansas City was the nearest "big city," their AAA team was in Omaha, and their games could be tuned on the radio, making Royals allegiance a natural fit for many Nebraskans.  I was among them, going to my first baseball game in the summer of 1984 at age eight, a double-header between the As and Royals.  My dad got me a Royals pennant at that game, which adorned the wall of my bedroom for years afterward.

I watched with glee the next season as the Royals won their first and only World Series title against the Cardinals.  Baseball cards soon dominated my life, and I strove with each set to at least get the complete compliment of Royals in my collection.  I even bought a Starting Lineup plastic figurine of George Brett.

My fall from Royals fandom did not come overnight, it happened largely due to my general falling away from baseball in high school.  I stopped collecting baseball cards, stopped watching games religiously, and spent most of my spare time in my room listening to music and reading non-baseball related literature.   In college, baseball crept back into my life during the end of the 1995 season.  Many of my mates on my dorm floor were huge baseball fans, and we all got together to see the game when Cal Ripken broke the consecutive games played record.  We later watched the exciting one-game playoff that year between the Angels and Mariners, as well as the epic playoff series between the Mariners and the newly resurgent Yankees.

That season hooked me on baseball again, but I did not really pull for the Royals, or any other team, for that matter.  Part of this had to do with my distance from my childhood loyalties, but mostly because the Royals were ten years into their current twenty-seven year playoff drought.  I did see them play the Cardinals in 1997, but mostly to witness Mark McGwire in the flesh and to attend an interleague game when they were still a novelty.

Moving to Chicago in 1998 gave me the first chance of my life to live in a major league city, and after flirting with the Cubs for awhile, I decided to commit to the White Sox.  They had a lot of exciting young players, and being there in the spring and summer of 2000 for their division-winning run solidified my support.  Although I am now ashamed of my choice, I had left behind my childhood team for one that I thought would be a winner.

It's hard to believe today, but once the Royals bestrode the American League like a colossus.  In an eleven season run between 1975 and 1985, the Royals won the American League West division five times, went to two World Series, and won a title.  Between 1976 and 1980, they won their division four out of five seasons.  During the whole 1975 to 1985 period, they finished lower than second only in strike-shortened 1981, also the only year they failed to achieve a winning record.  In seven of these eleven seasons, they won more than 90 games.  The Royals have accomplished that feat but one time since, all the way back in 1989.  During their glory years, the Royals teams had George Brett (the greatest third baseman in American League history), Dan Quisenberry (one of the era's great closers), Frank White (the best second baseman in the American League for most of his career), Bret Saberhagen (a two time Cy Young winner), and Willie Wilson (a speedster who led the league in triples five times.)  Beyond all that, they played in a nice park and sported attractive uniforms.

From 1986 to 1989, during my most intense years of childhood baseball fandom, the Royals did not make the playoffs, but were highly competitive and featured the dazzling talents of Bo Jackson.  However, the team made some epically bad personnel decisions, which combined with new baseball economics that have made it extremely difficult for small market teams to succeed, created a perfect storm of futility.  In 1987 entering into a period when low-revenue teams have no margin for error, the Royals traded future ace David Cone for career backup catcher Ed Hearn.  After their successful 1989 campaign, they made two big free agent signings that turned out to be big time busts: pitchers Mark and Storm Davis.  Once the old core of the team aged and retired, the Royals really dropped off.  From 1995 to today, the Royals have had a winning record just once, in 2003.  In that same period, they have lost 100 games in four different seasons, including three in a row from 2004 to 2006.

That run of awful seasons followed their aforementioned hope-raising winning campaign of 2003, a turn of events that would crush the souls of most baseball fans.  Making matters worse, the Royals have groomed a great deal of top talent, only to lose it to better financed teams.  Johnny Damon, Zach Greinke, Carlos Beltran, and Jermaine Dye have all flown the coop, in some cases to bring titles to other teams.  Damon led off for the "idiots" Red Sox of 2004, and Dye won the World Series MVP in 2005 while bringing Chicago its first World Series victory since 1917.  Holding onto talent has not been a priority, since in 2011 the Royals had the lowest payroll of any team in the major leagues.  They had a $35 million payroll, compared to $202 million for the Yankees and $168 million for the Red Sox.

Small market teams can indeed compete (though not always long term), that was the lesson of Billy Beane's moneyball tactics in Oakland, and Tampa Bay's success in recent years.  (Of course, Beane's stable of pitchers had nothing to do with his game plan, proving that it takes a fair amount of luck to win with a low payroll.)  However, behind each success story are teams like the Royals and Pirates mired in decades of failure.  When I look at the Royals, a once proud and dominant franchise that now is lucky not to lose ninety games, I feel relieved that I switched allegiances, but mostly sad that in baseball, as in the rest of American life these days, money equals power and success, and those without wealth will have to work five times as hard and be ten times as lucky to get ahead.
Posted by Werner Herzog's Bear at 4:58 PM

Traitor! Just kidding. But I think you're writing this lament, as fortune would have it, at precisely the wrong time. The Royals are on the cusp of being respectable again, if they're not already there. The team has bright young talent (e.g. Hosmer, Duffy, Crow, Moustakas, Cain), the owner has begun to sign that young talent to long-term contracts (e.g. Gordon, Escobar, Perez), and the farm teams are full of exciting prospects (e.g. Wil Myers, Odorizzi, Starling). I think the team will easily be competitive this year, provided their mediocre tactician of a manager, Ned Yost, doesn't hold them back. So it might be time to reconsider. I'm truly excited about the Royals, for the first time in years---though I will never again purchase any baseball cards for myself. ;) - TL