An Appreciation of the Star Wars Expanded Universe 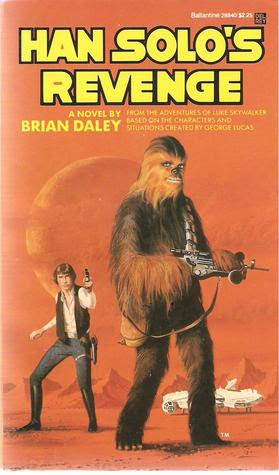 I was reading today that with Disney producing the new Star Wars sequels, the "expanded universe" of novels, comic books, and TV series in the Star Wars world has been declared non-canonical.  The new church hierarchy has spoken, and the likes of the Zahn novels and the Ewok Adventure are now the equivalent of the Gnostic gospels.

I feel highly ambivalent about this.  On the one hand, the new makers of the new movies need a free hand, and thus shouldn't have their plot ideas hemmed in by innumerable minor, and often low grade, things written under the Star Wars name.  I get it.  However, the expanded universe has an important place in my heart and in the hearts of other Star Wars fans, and it ought to be given its due credit.

I saw Empire Strikes Back in the theater at age four, and for my fifth birthday got a bevy of action figures.  After that point, I never looked back. Star Wars dominated my imagination as a young child, and my friends and I played with our action figures and took on the roles of the characters for hours.  (I was a good-goody, so I was Luke Skywalker, natch.  My more daring best friend Danny always took Han Solo.)

Problem was, I wanted more.  The three year gap between Empire and Jedi was unbearably long, and I savored every Star Wars-related piece of entertainment, especially the rare treat of seeing the re-run of Mark Hamill's appearance on the Muppet Show.  One day in the library, where I probably spent too much time even back then, I saw an orange-covered paperback with Han and Chewbacca on the shelving cart part of something called The Han Solo Adventures.  I was very intrigued, although too young to read something on that level.  (In high school I bought the reissue and ravenously devoured it.)  I instead dived in the Star Wars comic books owned by a friend's older brother, intrigued that the characters I loved could be involved in all sorts of stories I'd never heard about.

Once Jedi came and went, there was a period where I acted like I was too cool for Star Wars.  After years of it dominating popular culture, in the mid-1980s enough fatigue had built up that Star Wars stuff practically disappeared.  I remember in the sixth grade when we were telling our teacher ideas for what movie we'd watch in class on the last day of school, and I mentioned Return of the Jedi.  The teacher actually said, "aren't you guys getting a little old for that?"  (If I am not mistaken, we watched Monster Squad.)

Deep down, however, like a lot of other kids my age, I'd never really let Star Wars go.  I watched my VHS tapes of the original trilogy recorded off of network TV (commercials and all) over and over again.  During the beginning of my seventh grade year I sought out the novelization of the original Star Wars, and marveled at the differences between the book and the film.  Back in those days, though, there was no new Star Wars product.  No books, no films, no video games, no kids shows.  The role-playing game was just about the only new thing out there, but since my mother thought that such entertainments were Satanic, I never got to play it.  (I could only stare longingly at the ads for it in my contraband copies of Dragon magazine.)  I'd heard rumor that George Lucas was going to make prequels that would explain Annakin Skywalker's  fall, but with the passing of every year, that prospect seemed more remote.

Then, in the early 1990s, a miracle happened.  Lucasfilm authorized Timothy Zahn to write a trilogy of sequels.  I cannot express my level of anticipation for these books among my secret Star Wars nerd friends, or how happily surprised we were by how much we liked them.  A veritable floodgate seemed to open up after that.  I played Star Wars games on my Nintendo, Dark Horse comics put out new (and interesting) Star Wars series like the Dark Empire books, and the local Ben Franklin variety store started carrying Star Wars models again.  A friend of mine spent months creating a suitably battle-damaged and unique-looking Millennium Falcon.  Older expanded universe stuff like the aforementioned Han Solo Adventures came back into print.

None of this stuff was nearly as good as the original films, but it filled a hole.  It also worked because the Star Wars universe is such a well-drawn and interesting place, and always a fun location to park my imagination, especially at that age.  Things have probably gotten a little out of hand, but as hacky and mediocre as much of the expanded universe stuff can be, I'd be hard pressed to say it is of lower quality than the much anticipated prequels turned out to be.  Zahn's trilogy is workman-like, but he never released an atrocity like Jar Jar Binks upon the world.  It's safe to say there is more of the spirit and feeling of what keeps Star Wars geeks coming back in the humble, yellow-pulpy pages of my copy of The Han Solo Adventures than in the mega-pixeled spaceship battles in any of the cinematic prequels.  For that, the expanded universe deserves an appreciation.
Posted by Werner Herzog's Bear at 6:00 PM