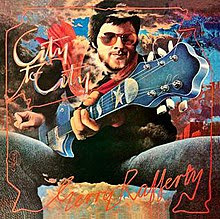 The other day I had an intense flashback to my recent past when the 70s AM radio chestnut "Baker Street" by Gerry Rafferty was plucked by the shuffle on my iPod and into my ears while navigating Penn Station during my morning commute.  The song almost stopped me in my tracks when I heard it, since it transported me to one the lowest moments of personal despair in my life.

It was three years ago that I was in my third year as an assistant professor behind the pine cone curtain in East Texas.  I was living over a thousand miles from my wife, and despite having three highly placed articles and book contract, I could not get a single AHA interview.  I knew it was time to quit academia and move to New Jersey, but I just didn't know how I would do it.  Feelings of failure and loneliness gripped me nightly.  I tended to respond by spending so many evenings playing old records, sipping wine, and burying my head in a book.  These three things combined distracted me enough to be able to withstand my hours alone with my dark thoughts of despair.

That didn't help me in the morning, though.  I woke up alone, living in a sterile apartment in a monotonous complex on the edge of an alien town, far far away from home.  So many mornings I walked out of bed to the bathroom, looked at myself in the mirror, and wondered just what the hell I was doing, and whether I would ever be able to truly go home again.  To help bear the pain, I would throw a record on the turntable.  When I needed soothing, Fleetwood Mac's Tusk did the trick, but when I wanted to wallow in my homesickness, I listened to "Baker Street," a song about that feeling that chasing a dream has led to a dead end without a way back.

Sitting in my house tonight, surrounded by my family and living in a great and welcoming town, I could not be further away from where I was three years ago.  Whenever I bitch about my commute or get overwhelmed with the demands of parenthood, it helps to remember how much happier I am now.  I wrote the following post on my old blog about "Baker Street," back when I thought there was no way out of the utter desperate despair I was feeling.  If you, dear reader, happen to feel the same way, know that you can still find a happy home.  I'm proof.  (By the way, the addendum at the end of the old post was bullshit.  I wrote this on one of many dark nights of the soul I experienced that winter.)

***
In that last coupla years my music tastes have turned in directions I never could have anticipated. I became devoted to the punk rock of the 70s at a young age, and still love to hear it. Hell, this morning I popped "Born to Lose" by the Heartbreakers (the Johnny Thunders, not Tom Petty edition) into my car stereo on my way to work. However, I've come to love some of the late seventies sophisticated pop music that was supposed to be anathema to punk rock: Steely Dan, Fleetwood Mac, Supertramp, etc.

Of this genre, there is probably no one song that I adore more than "Baker Street" by Gerry Rafferty. For years I'd known it merely as "that saxophone song." One night I got a wild hair and bought it on iTunes, and this last weekend I finally tracked down a vinyl copy of the City to City album, which I am currently in the process of wearing out. Like the aforementioned Supertramp's Breakfast in America album, Rafferty nails the sense of loss, confusion, and disappointment that often accompanies life after the age of thirty. As he sings, "another year and you'll be happy/ but you're crying now."

The lyrics are evidently based on Rafferty's time as a busker in London and sleeping on the floors of friends on the song's eponymous street. While he's describing life as an itinerant musician, I really empathize with the song as an itinerant academic. Even though the song never makes it clear that the main character isn't from London (and Baker Street), it's pretty well implied that he's far from home. In fact, the thought of having any real home at all in the world seems increasingly distant, despite the last verse, which promises "tomorrow is a new morning/ and you're going home." It comes off as an empty hope, a fervent wish that will inevitably dissolve in the reality of the rays of the rising sun and the cruel demands of the workaday world. The famous saxophone riff, much more so than the words, articulates that desperate longing for belonging, and an overwhelming desire for oblivion, to "drink and forget about everything."

There are plenty of songs out there about first love, sexual desire, break-ups, romance, and having a good time. However, there are a precious few about those long, dark nights of the soul when the past has led to a dead end, the future is uncertain, and home so so far away.

(For all my friends and loved ones out there, I'm just musing about this, not having one of these dark nights myself this evening.)
Posted by Werner Herzog's Bear at 6:22 PM