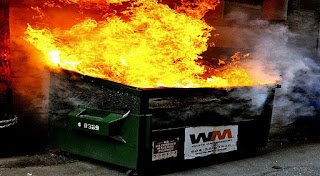 We all know this year was a dumpster fire. At least this blog wasn't!

Well, we've come to that point in the year again where we take stock. In 2016 I published a piece with Jacobin that got a ton of positive attention (including from the New York Times). I did not write anything so popular this year, but I did write a lot more for outside websites.

That's the stuff I tend to be proudest of this year, when this humble blog became more of a test kitchen for my brain and less where my finished ideas landed. I'll try to do better next year. Anyway, here's the stuff I'm proudest of, written for this site and others.

These Are America's Brezhnev Years
This was my first piece for Tropics of Meta, and I think my best. It also seems to have been very prescient.

What Smokey & the Bandit Can Still Teach Us About the "New South"
This is another Tropics of Meta piece, and another that was the product of years of thoughts turning over in my head.

Rockers, Warriors, and the Last Days of Rebellion in the American Teen Film
This was another piece for Tropics of Meta, where I explored the controversial teen rebellion films of 1979. It involved months of work and research, and I think it's one of my best pop culture pieces.

Trump's Jacksoniansim and Its Needed Response
Like my theory about the Brezhnev Years, I have been thinking a lot about Trump and Andrew Jackson, and this piece for Liberal Currents finally put those ideas together.

The Meaning of the Gettysburg Address 154 Years Later
The Gettysburg Address
Strangely enough, I wrote two piece about the Gettysburg Address this year. The first was for Liberal Currents, and was born in a tweet-storm on the anniversary. The second is a piece of satire where I imagine what the current president would have said with the same speech in front of him. That was first published on this blog, then on Tropics of Meta.

I'm Sorry We Let You Down, Mr. President
This was my farewell to president Obama, and where I blame myself for not having been as politically active during his presidency as I am now.

A Battery Park Reflection
I wrote this after participating in protests in New York City against the anti-Muslim travel ban back in January. At the time it was already my second protest of the year.

The Consolation of Classical Music
Classical music has been a constant companion in this wretched year for me. In fact, some Bach today totally lifted my spirits.

Billboard Top Ten March 28, 1981
This is my favorite in my looks back at top tens this year.

Requiem For A Small Town Movie Theater
About the now defunct theater in my hometown where I saw a lot of my all-time favorites.

Two-Lane Blacktop (The 1971 Project)
Well I didn't stick with my series on 1971, but I like my analysis of this film.

Memories of The Joshua Tree At 30
Gen-Xers can be nostalgic, too.

The Nixon Ad That Was Roger Ailes' Ur-Text
One of my better historical analysis posts, this one about the seeds of Roger Ailes' Fox News style.

"Blood and Soil" Is The Story The Media Missed In Charlottesville
I wrote this about the FIRST white nationalist rally in Charlottesville. I and others tried to warn people about what was really going on. Unfortunately, nobody really listened.

The Kinks, "Celluloid Heroes"
Another fine "track of the week." I need to revive that series.

Report From A Small Protest
I showed up at a protest where there was only one other person. We need to do better.

Out Into The Great Wide Open
One of pieces about "bubble jumpers" like myself who grew up in conservative places in their own bubble and now live in urban bubbles.

Sgt Pepper and Boomer Nostalgia
This topic has been on my mind for about 30 years, which is insane.

Protest Has Really Mattered In The Trump Era
Shout it from the rooftops.

Some Advice For Democrats
They actually seem to be taking some of it.

Pleasures And Pains Of Solitude
Inspired by some rare time alone.

A Political Weather Report From Nebraska
Read this, and not the crap by coastal journalists parachuting into places they don't understand.

Memories of a Lapsed Husker Fan, part one
I wrote a series about my Cornhusker football fandom, which I feel very ambivalent about these days, but which once mattered so much to me. I am proud of the whole series.

Media Talking Points From A Scholar Of Historical Memory
This one went semi-viral, and I dashed it off in a moment of extreme passion regarding the Confederate monuments debate.

REM, "You Are The Everything"
This song has really stuck with me this year, and it's one I'd forgotten about for years.

Requiem For A Dog
RIP Hannah

Nice Liberals versus Fighting Liberals
Still too many nice liberals out there.

Life During Wartime
Written on the day I had the worst attack of The Fear.

Nostalgia Rock And The Reagan Dusk
Another comment on the decades-old phenomenon of Boomer nostalgia, looking here at its origins.

Sing Me Back Home
About missing my home state on Thanksgiving.

Cranky Bear Says You Don't Need To Fight With Your Conservative Family This Thanksgiving (Or Find Common Ground, Either)
I think the Crankster was onto something here, and I hope those other stupid takes die.

"Code Red" And Crying At My Dinner Table
My daughters had their first active shooter drill as kindergarteners. I did not take it well.

Ruminations On Internal Exile
More thinking about what it's like to live in a place very different from where you grew up, even if it's technically in the same country.

West From Omaha
I am pretty proud of this description of my homeland's landscape.

Glimmers of Hope in 2017
They are there, trust me.

Email ThisBlogThis!Share to TwitterShare to FacebookShare to Pinterest
Labels: best of, me