Feeling At Home And Uneasy In LA 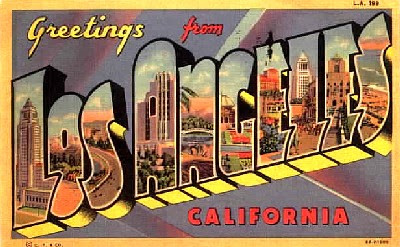 I have not been writing as much because I am currently on vacation in California. I have spent the last four days in Los Angeles, a city that I have very quickly learned to like. In a weird way, I immediately felt at home here.

I grew up on the Great Plains, in Nebraska, and the sky here too is a vast, Western sky. The clouds are Western clouds. The dry, dusty air is Western air. The scrubby mountains I see in the distance are Western mountains. This is a fundamentally Western city, not oriented towards the East, but to the Pacific. Here the weather and natural elements are scary and unpredictable. The tornadoes, heat waves, and blizzards I grew up with are mirrored here by earthquakes and wildfires. In the West you can never escape the feeling that someday nature will come and just wipe you off of the map, and are reminded of the unnatural fact of your very existence in a place not fit for millions of people to live in. (Nebraska draws its life-giving water from underground, Los Angeles from rivers many miles away. Neither is ultimately sustainable.) Los Angeles is Western too in that it is a new city with people born elsewhere and a kind of haphazard construction. Nothing here feels permanent.

I have seen a lot on this trip, from the beaches of Santa Monica to the tourist traps of Hollywood to the hipster havens downtown to the rarified culture of the Getty Center. I have eaten Korean fried chicken, tacos al pastor, and a Los Feliz brunch. I've shopped at Amoeba and been to a movie at a 1920s movie palace.

As much as I have loved being here, there is something else that makes me uneasy. The contrasts between rich and poor may be even starker here than in New York, and that is saying a lot. The other day we drove through Skid Row on our way through downtown, an area of squalor so vast that it is named on the map. There were blocks of tents and people living in them. I've seen smaller tent cities all around the city in practically every neighborhood we have visited.

If the West has always symbolically represented a place of opportunity and reinvention, California is both its culmination and its dead end, since you can't pick up stakes and go further west after you've hit the ocean. In a place like this my country's failure to live up to its promises of plenty are stark. Just a few blocks from Skid Row old warehouses are being converted into microbreweries and apartments rent for astronomical prices. Come to Los Angeles, then, and see what has become of the "American Dream," both its possibilities and its limits.
Posted by Werner Herzog's Bear at 8:46 PM