Hollowed Out (My Hometown As A Microcosm Of The "New Economy") 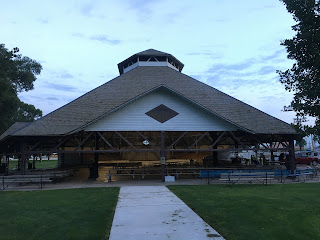 The Chautauqua Pavilion, a relic of my hometown's Progressive Era boom years

When I was back in my rural Nebraska hometown of Hastings last week I had the pleasure to go on a thirteen mile bike ride around the town with my dad. We went to pretty much every corner of the town of 24,000, and I was able to see more vividly than from my car window what's been happening in it.

Hastings is not typical economically, but many of the broader trends are remarkably visible there nonetheless. The town initially grew up in the Gilded Age as a railroad junction where the Burlington and Union Pacific came together. Growing up timing a trip across town had to include some extra minutes to account for waiting for a train, since there was no under or overpass on the Union Pacific as there was on the Burlington. After the economic depression of the 1890s the town boomed in the early twentieth century. It was my great fortune to have grown up in a town that had its youth in the Progressive Era, which meant the library, parks, and schools were all well-made and well-supported.

It's economic high point came in the 1940s, with the building of a massive naval ammunition plant on the edge of town for World War II. (My dad's father, too old for the draft, worked there.) The city's population increased by a third, but that would be the last major economic boost. After the war small industry assisted by proximity to the railroads remained (and still does), and the city persisted as a commercial center for the surrounding rural area.

However, when the interstate was built through the state, it went through larger Grand Island, 24 miles north. There is a line of broken down and abandoned motels on highway six in Hastings attesting to the significance of this decision. Then, in the 1980s, Nebraska's farm economy took a major hit, forcing many farmers into foreclosure. This is evident in the small towns in Hastings' orbit, which mostly look beaten down and half-abandoned. The industrial sector is still thriving (unlike elsewhere), but the commercial economy has greatly declined. The Union Pacific re-routed their tracks to bypass the town in the 1990s, which seemed to say something about its reduced place in the world.

What you see in my hometown now is something you see around the country: the squeezing out of the middle. I was lucky to be from a middle class family that stayed up during the squeeze, others were not. My old neighborhood is evidence of this. It was built in the 1960s, consisting of very small, box-shaped ranch houses. Growing up it was solidly lower-middle class and people owned their homes. Now many of the homes are rentals, as home ownership even in a market as cheap as Nebraska's is increasingly difficult.

Businesses that cater to the disappearing middle (and especially lower-middle) are also struggling. The local Perkins and Applebee's restaurants are closing, in the midst of what is supposed to be an economic boom. Allen's, the local department store with its own grocery store is now closing everything except for food. The last non-box store general clothing store (Herberger's) is closing too. (I got a couple of things there and mourned the place I bought all my school clothes as a kid.) The local men's store and tailor is still going downtown, but anyone not wanting to buy a men's suit either has to go to Wal-Mart or drive 24 miles to Grand Island. Herberger's was the last holdout in the ironically named Imperial Mall, now a giant dead rotting hulk visible from my parents' front window. Behind it are an abandoned theater, grocery store, and restaurant, likely to be ruins forever.

Many more local establishments are gone now too. A legendarily wild bar with a dance floor called the Second Street Slammer, due to the bars on its windows, is also closed. So is the local family restaurant, the OK Cafe, as well as Bernardo's, the steak house where I marked all kinds of family milestones, from my sister's wedding rehearsal dinner to my grandparents' fortieth wedding anniversary. Ponderosa Lanes is no longer setting up the bowling pins.

It's not all doom and gloom, of course. The local bookstore, Prairie Books, is still going downtown after the death of one of its owners. The beautiful historic municipal baseball park, Duncan Field, now has a summer league team. However, the places that are new and thriving are the ones catering to the affluent, rather than the middle. There are two coffee shops downtown, a new fine dining restaurant that takes reservations (!), two (!) microbreweries and old building lofts being converted into condos, including the home of an old brewery that had never been occupied by anything in my lifetime. Perhaps these innovations will attract the educated professionals who rarely come back after growing up in Hastings, and who do not stay long if they move in from away. Be that as it may, it is obvious that in Hastings, like everywhere else, those at the top are doing well for themselves.

Things are not so great for those squeezed down. For a town with a very low unemployment rate, Hastings has blocks and blocks of dilapidated housing, some of it built in a temporary, slap-dash fashion for war plant workers in the 40s. Working-class neighborhoods look worse for wear, some scruffier, some practically squalid. I got wind of the literal squeeze at the county fair, when I overheard a conversation about a factory worker experiencing wage theft. The low wages that make Hastings attractive to bosses make living tough for workers. Now even Wal-Mart might be too expensive to shop in. There are now three dollar stores in town, one in the cancerous growth of box stores on the edge of town, two others in working class areas on the other side of the tracks where other stores and restaurants lie vacant.

That vacancy can be seen elsewhere. While associational life in Hastings might be stronger than in many other communities, it is much less pronounced than it used to be. At the county fair there were many, many, fewer civic organizations with tables than 20 years ago, and all of them had conservative religious or political (or both) orientations. A got a graphic glimpse of this when biking past what was once the Knights of Columbus Hall, which is now an auction house touting the sale of guns and ammunition. The Tribune, the Monday-Saturday daily paper, still lives but it is thinner than boarding house soup. When I attended 11 o'clock mass with my parents at one of the two Catholic churches I was shocked at how few people were there, even accounting for it being summer. (There is a megachurch in the aforementioned cancerous growth on the edge of town, so perhaps this represents more a shift than a lack of engagement.)

Associational life is a plumb necessity in an isolated Plains town like Hastings, but even there it is going the way of the dodo. While people what they call "the Heartland" often feel apart from the broader currents of American society, they are not. My hometown, like so many others, is one more atomized and divided by class than ever before. At least they have IPAs.
Posted by Werner Herzog's Bear at 4:33 PM