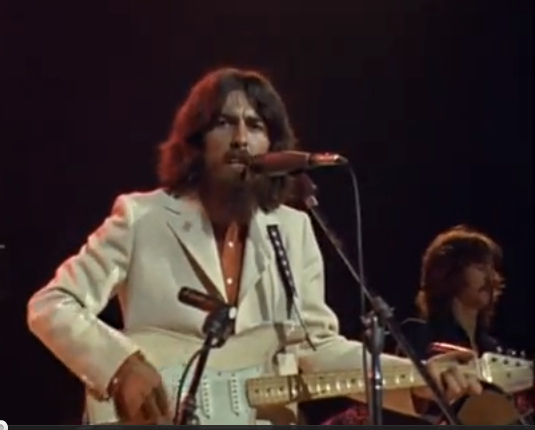 Yesterday my buddy and erstwhile friend of the blog Brian I. posed an interesting question on his Facebook page, inspired by a conversation on another feed.  If there was a theoretical extra Beatles album made up of songs recorded by the members solo in 1970-1971, what would the track listing be?  It's a fascinating question, not least because those years saw a pretty impressive amount of material from  the former Fab Four, even including Ringo's hit "It Don't Come Easy."  (Starr also played drums on George and John's records, and his distinctive sound is all over them.)

Of all the Beatles, George Harrison put out the best album with All Things Must Pass, a triple disc wonder full of great songs that Lennon and McCartney had not allowed on the later Beatles records.  As with Lennon and McCartney, he also used his first solo album to comment on the rather acrimonious breakup of the band.  (If you're interested and don't mind getting depressed and having your illusions shattered, check out Peter Doggett's You Never Give Me Your Money.)  Harrison's frustrations with being put in the corner were public by this point, made famous by a testy studio exchange with McCartney captured on the dreary Let It Be documentary.

Lennon was pretty savage about all of this on "How Do You Sleep," and McCartney was a bit more veiled, but no less vicious on "Dear Boy" and "Smile Away."  The bitterness in these songs drags them down, Harrison used his ill will to craft a song that sounds joyous: "Wah-Wah."  It starts with an amazing, swirling psychedelic guitar figure before percussive piano and one of Ringo's best "funny fills" slams in and a mesmerizing wall of sound bursts forth.  It rushes along irresistibly with some absolutely searing guitar leads, making it one of my favorite songs for driving on the highway.  You'd never guess it's about getting a headache from dealing with Paul McCartney.

I think that makes sense, since Harrison used his first album as a kind of declaration of artistic independence, and the sheer awesomeness (in both senses of the word) of the song itself sends a message: "listen to this, and realize I don't need you anymore."  After all, Harrison declares "I don't need your wah-wah," which also makes this song a good one to blast while you're quitting a crummy job of your own.
Posted by Werner Herzog's Bear at 4:39 PM

Here's my favorite discussion site for all things Beatle:

The imaginary 1970s Beatle album (built from their solo tracks) is covered, among other topics.