Ode to a Cat 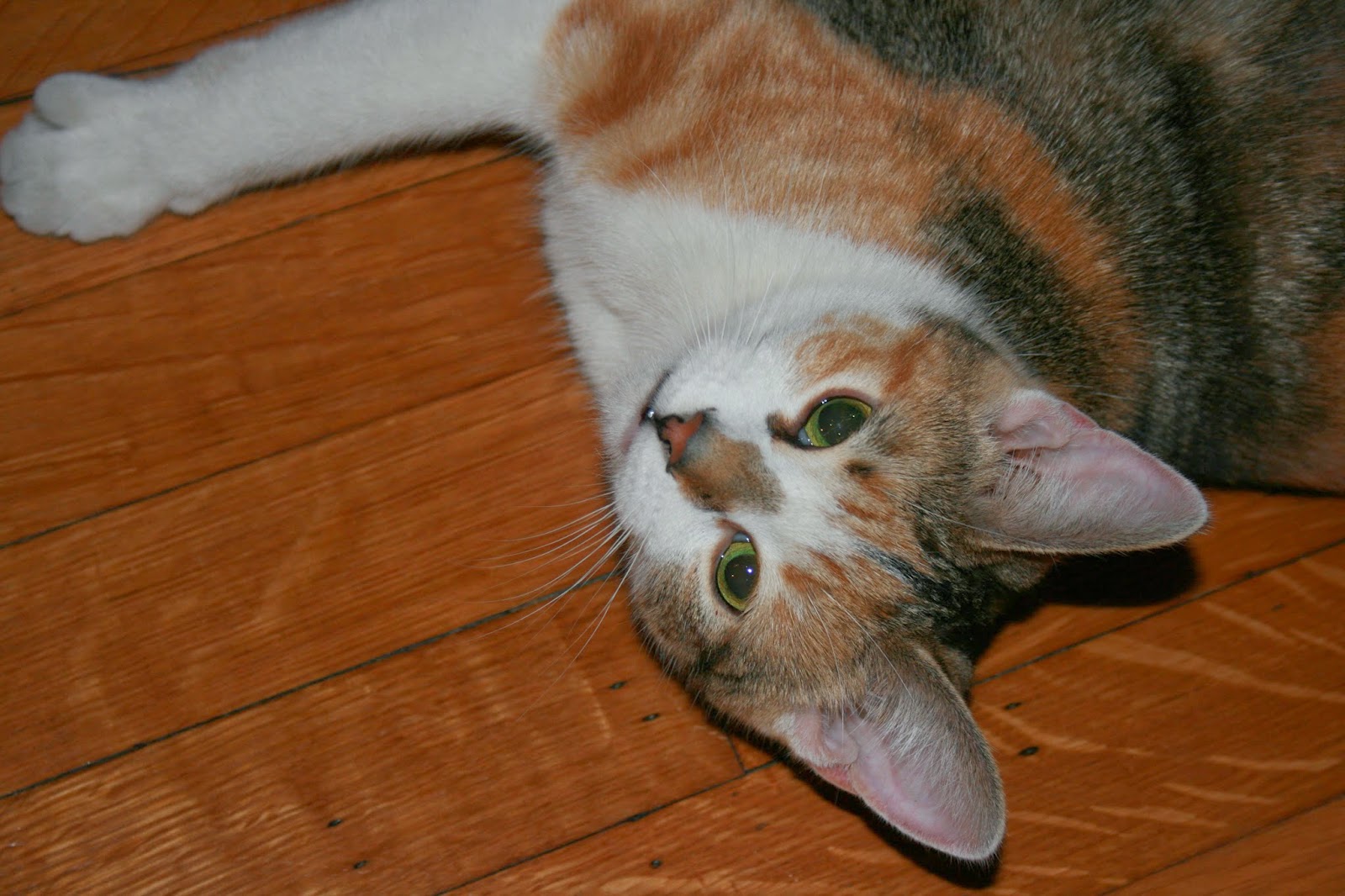 My cat Stella had been ill for two months before dying next to me yesterday morning.  She went from being sick the day before to suddenly being barely able to stand up.  At that point I knew her time was short, and I stayed with her all through the night before she finally gave up her hold on life just before the break of day.

She didn't let go lightly, Stella was always a tenacious cat.  She survived being orphaned on the streets as a kitten, when I was lucky enough to meet her acquaintance at an animal shelter back in January of 2007.  I had just moved to Michigan back in August to take my first job out of graduate school as a visiting assistant professor.  While I liked the town well enough, I was living alone for the first time years and feeling isolated in the depths of a typically hopeless Michigan winter.  For a long time I'd wanted a cat of my own (my family had them growing up), but the life of a young scholar is certain, and I wanted to wait until I lived a more settled life.  It soon became apparent to me that a settled life would be long in coming.

I still remember our first meeting like it was yesterday.  I had first seen her in a plexiglass cage, her orange, black and white back against the wall while she slept.  I had not picked her to be one of the cats to meet, but a person at the shelter thought I should give Stella a go.  Sometimes I think of how easy it would have been to not have had her in my life, I could just as easily taken another cat home with me.  They brought me into a little side room with a table and chair, then brought Stella in.  She was little and sprightly, prancing about the room, then running up to rub her face on my hand.  Her kittenish exuberance brought a smile to my face, and we made an immediate connection.

It was extremely hard yesterday to keep that image out of my head, and painful to contemplate when gazing on her lifeless, emaciated body, and more painful still as I dug a deep hole in the flower bed to bury her in.  She had always been a very healthy and robust cat, active and avoiding the fattening that many cats undergo in their middle age.  This made her mystery illness that much more shocking.  During the first few years we had together her exuberance and desire for play was often exasperating.  She used to demand to chase string on a stick until she collapsed, her sides heaving.  She would complete flying backflips, and if I was trying to work instead of play with her, she would calmly put her front paws on the small of my back and subtly dig her claws into the most tender spot.

Unlike so many other cats, she could handle travel and life transitions.  She made trips with me from Michigan and Texas to New Jersey on multiple occasions, including by car.  During our time together we moved from Michigan to Texas, Texas to Newark, and Newark finally to Maplewood.  She was so happy in our new house, since it gave her the top floor as her turf and more territory than she had in our old apartment, where the dog was loathe to cede any ground.  She was with me every day in one of the most unpredictable periods of my life, where in the space of less than eight years I went from being a newly minted PhD on the contingent track to being an assistant professor to being married to leaving the academy to becoming a father.  During those long nights in Michigan and Texas when I wondered if I had wasted my life and potential, she was always there for me.  On those mornings when my serotonin levels dipped dangerously low and couldn't get out of bed, she would hop up and playfully bat my nose until I succumbed and got up.

I always figured I'd get eight more years with her, but life just isn't fair.  I don't know if I will ever get another cat, if only because I never want to feel this kind of pain again.
Posted by Werner Herzog's Bear at 6:39 PM

Reading about Stella putting her claws in your back, I was reminded of all the times we would talk on the phone and I would hear this: "OW! Stella, stop that." I also think of the times you both came to visit in Illinois or Atlanta, while on the road. She will be missed.

You broke my heart with this post. But if it's any consolation, remember you completely changed her life. When you met her, she was sitting alone in a cage. You took her home and literally saved her life.

And at least she passed at home. I made the mistake of trusting my idiot hometown vet and his stupid support staff. I took my old cat, George in, and they gave him a shot that exacerbated his diabetes. When it came time to "put him to sleep" the vet grabbed him out of my arms and took him in a separate room. Told me I couldn't be present. I'll never forgive myself for bringing him to that vet.

I can tell you from experience, the pain doesn't really go away. But remember the good times, and again, remember the huge difference you made in her life.

Thanks, guys. It's been hard coming home from work and expecting to see her, or waking up in morning realizing she won't be there on the lip of the sink begging for water from the tap, which she always did.

Beautiful, Jason. Stella was such a wonderful presence. I was so sad to hear the news--I'm sending positive thoughts your way.

We who choose to surround ourselves
with lives even more temporary than our
own, live within a fragile circle;
easily and often breached.
Unable to accept its awful gaps,
we would still live no other way.
We cherish memory as the only
certain immortality, never fully
understanding the necessary plan.
— Irving Townsend