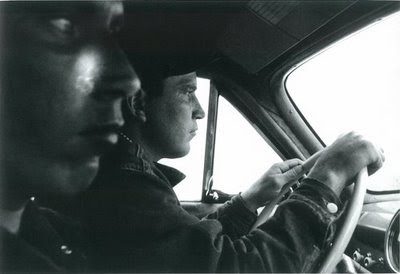 Back on my old blog I had a tendency to write a lot of listicles, before Buzzfeed ran the genre into the ground via self-parody.  I'm reposting my list of top ten road movies in large part because I recently took advantage of a 50% off sale at the Criterion Collection to finally buy Two-Lane Blacktop, one the great buried treasure of American cinema, and my favorite road flick.  Also, I have been missing the presence of the road in my life.  Growing up in Nebraska, the road was a necessary part of life, since everything was so far apart.  In college I spent most of my weekends in a van traveling to far-flung debate tournaments.  After leaving Nebraska after college coming home meant long drives from Illinois, Michigan, and Texas.  I grew to appreciate them as moments of meditation to the point where I would sometimes drive from Texas to New Jersey when going to stay with my wife for the summer (when we were still long-distance.)  Now that I'm settled in New Jersey in the nation's crowded Northeast corridor with two toddlers not yet up for long stretches in the car, I feel estranged from the road that was such an important part of my life.  My best connection these days are the following ten films:

1. Two-lane Blacktop. First, let me be clear. Other films on this list are better movies than Two-Lane Blacktop, but none is a better road movie. No other film captures the silences and repetition of long distance driving, or that wonderful feeling of entering a higher state of consciousness after driving hundreds of miles. It came out in 1971, and probably does a better job than any other film of capturing the ennui that beset the counterculture after the death of the hippie dream. Yes, the acting by first timers James Taylor and Dennis Wilson is as wooden as the HMS Bounty, but the highly underrated Warren Oates gives one of his best efforts.

2. Five Easy Pieces. A year before Two-Lane Blacktop, Jack Nicholson gave one of his most memorable performances in this story of a declasse musician who goes back home to the Pacific Northwest from the oil fields of Texas. It rates this high for two reasons. In the first place, it contains the best scene ever set in a roadside diner and one of Nicholson's most famous. Second, it gets at the reasons for the prevalence of the road movie in American cinema. America has long been a transitory nation, a nation of mobility and re-invention where the past can be escaped via a flight down the road. The film's finale very aptly and tragically shows how the road can be an escape hatch from responsibility.

3. Smokey and the Bandit. You didn't think these would all be art films, did you? What's more compelling than the quest of two men to haul a load of Coors beer from Texarkana to Atlanta in short time while being foiling the "high speed pursuit" of a stereotypically stupid, bigoted Southern sherriff? It's got a soundtrack full of seventies country music goodness from Jerry Reed and Waylon Jennings, and Sally Field at her spunkiest. If that's not enough, you get to see the wondrously funky automobile known as the Trans-Am do all kinds of crazy jumps.

4. O Brother, Where Art Thou? In my opinion this is the funniest movie the Coens ever did by a country mile. If you don't think so, then you're just "dumber than a bag of hammers" as Ulysees Everett McGill would say. It might barely qualify as a road movie, but since it's based on the Odyssey, the original road/travel saga, I'm putting it on the list. Just for that and the belly laugh I get during the scenes when George Nelson is outracing the cops. (Just for the Hell of it, watch it in Turkish.)

5. Vanishing Point. If it wasn't for the irksome intrustion of homophobia into the middle of this 1971 flick, it'd rate even higher on the list. It's the story of Kowalski, a former racer, soldier, and cop who has quit the square life because "speed means freedom of the soul." (It also inpired my favorite song by Primal Scream.) He takes some aphmetamines and makes a bet that he can transport a Dodge Challenger from Denver to San Francisco in only fifteen hours, which makes him a target for the fuzz. The whole way he is guided by another social outcast, a blind DJ and kind of Greek chorus named Super Soul, played to perfection by Cleavon Little (who's most famous for playing the sheriff in Blazing Saddles.) The ending may be the most nihilistic in the history or American film.

6. Every Which Way But Loose. Clint Eastwood playing a trucker + bare-knuckle fistfights + an orangutan = entertainment gold.

7. Almost Famous. Yes, it's more of a coming of age, nostalgia picture, but the scenes in the bus are some of the most sublime road scenes ever filmed.

8. Paper Moon. Everyone classifies The Last Picture Show as Peter Bogdanovich's masterpiece, but I think I actually like Paper Moon better. I don't know any other film that manages to so evocatively portray the wide open spaces of the Great Plains.

9. National Lampoon's Vacation. Remember when Chevy Chase was funny? This flick is one of my all time favorite guilty pleasures, if not for the Randy Quaid scenes alone. Although none of my own family vacations were quite this bad, I do have memories of sleeping in our van in a truck stop outside of Toledo (long story) and getting stranded in the Arizona desert.

10. Goin' Down the Road. Just to prove that road movies aren't a purely American phenomenon, Canada produced 1970's Goin' Down the Road, the movie Easy Rider wishes that it could be. This gritty slab of cinematic realism details the adventures of two working class guys from the Maritimes who go to Toronto in search of opportunity, only to find poverty and degradation. The ending, like Five Easy Pieces, shows the road as a tragic means of escape. (Perhaps even better than the film is the hilarious parody by the folks at SCTV.)
Posted by Werner Herzog's Bear at 6:24 PM