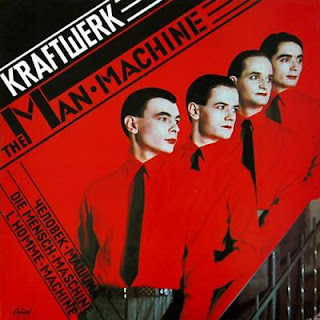 There are a small number of artists who can claim to have completely revolutionized popular music.  Some of them are obvious: Louis Armstrong, James Brown, Bob Dylan, The Beatles, etc.  Some fly under the radar, especially in this country.  For a long time, I thought of Kraftwerk as a kind of punchline to a joke, a group that embodied Teutonic rigidity and humorlessness, the musical version of Dieter from the old SNL sketch "Sprockets."  I'd always known they'd cast a long shadow over the musical landscape, practically birthing the electronica genre single-handedly and greatly influencing hip-hop, evident in the samples used by Afrika Bambaataa and Jay-Z.  In the last few years, though, I've really begun to appreciate their work as great music, rather than the roots of something else.

I have all of their classic albums (Autobahn through Computer World) on vinyl, and recently, and finally, acquired 1978's The Man-Machine.  Trans-Europe Express is probably a more monumental album, and Autobahn a bigger breakthrough, but I think of The Man-Machine as the true culmination of Krafwerk's mission.  They are all wonderful to listen to on vinyl, because it combines the sleakness of their electronic sound with the warmth of analogue.  It makes a lot of sense to combine those elements, since Kraftwerk's songs deal with modern humanity's relationship with technology.  We are natural, analog beings increasingly framed and constrained (and enhanced as well) by our digital devices.  As the title indicates, Man-Machine explores these themes in great depth.  Other Kraftwerk records zero in on specific technologies, such as cars (in Autobahn), radio and atomic energy (Radio-Activity), computers (Computer World), trains (Trans-Europe Express) and bicycles (Tour de France.)  The Man-Machine seems to take humanity, transformed by technology into something new and no longer human, as its theme.

The album starts with the percussive pulse of "Robots," which sounds more like modern techno music than anything Kraftwerk had created up to that point.  The sounds have gotten more complex, but the beat and the simplicity of the melody remain from Kraftwerk's earlier work.  It's easy to lose oneself in the song's seductive repetition, becoming like the robots who sing the song.  The next track, "Spacelab," retains the pulsing beat, but is more instrumental, and almost mournful, trying to replicate the loneliness of a almost-deserted space station.  It's the kind of thing you could imagine HAL humming to himself.  The last song on the first side, "Metropolis," seems to reference the famous 1920s German sci-fi film of the same name, imagining a fast moving train through a futuristic city.  The alternating, pulsating base of the song reminds of of Giorgio Moroder-style disco a la Donna Summer's "I Feel Love," except crafted for robots rather than polyester bedecked disco dancers.  I love listening to "Metropolis" on my morning commute train ride into the city; it's the perfect soundtrack for passing over the river from mundane, rusty Jersey into the bright lights of the Big Apple.

Flip the record over (again, an interesting thing to do with an artifact that sounds so futuristic) and Kraftwerk begins with the most song-like song on the album: "The Model."  There might be more words in this one track than on all the others on the album put together.  The icy chords replicate the glittering glamor of the model's world, as well as her personality.  Ironically, this song is the only one on the record about a person, but she sounds just as robotic as the machines featured elsewhere.  "The Model" flows into the more impressionistic "Neon Lights," a kind of wistful homage to the beauty of the city at night.  It's probably the most beautiful song on the record, containing real human warmth beneath its metronomic sheen.

That feeling leaves on the last track, "The Man-Machine," an almost brutally repetitive song that might very well be an apt prophecy of where the human race is headed in the digital age.  I suspect it is an homage to the robot from the film Metropolis, dubbed the "man-machine" by its mad scientist creator.  Kraftwerk subtly show us our modern, machine-age condition, but do it through works of great, and simple-seeming beauty, rather than philosophical treatises.  Twenty years from now, I am sure The Man-Machine will sound just as relevant.
Posted by Werner Herzog's Bear at 6:15 PM