As usual this time of year, I've got cardboard fetishes on the brain.  With the Super Bowl over, my mind is free to dream of baseball season, and pitchers and catchers reporting to camp in only a couple of weeks.  With each passing year I cherish more and more the start of baseball season and its promises of hope and renewal, and with it green grass and the warmth of the sun.  When I was younger and my baseball enthusiasm had just been sparked, this was the time of year when I eagerly set out to buy wax packs of the new sets of baseball cards at the local Walgreens and Woolworth's.

My collecting was most intense in the years 1987-1989. In '89 I entered junior high and switched my collecting habits from baseball cards to comic books, and by 1991 I would be on my way to being the music junky that I still remain today. My collecting years happened to coincide with the Golden Age of baseball cards. Almost all of the other boys at school were into it, and we traded cards in our basements after school and on the playgrounds during recess. Card collecting became a big time hobby; I still remember buying copies of Beckett's Baseball Card Monthly at the local card shop and tracking the prices of my most valuable rookie cards like they were valuable blue chip stocks: Bo Jackson, Will Clark, Greg Maddux, and Mark McGwire. Trading could be ruthless as anything on Wall Street. I still remember the time I made a kid cry because I basically swindled him out of a 1986 Topps Pete Rose card. (They were considered especially valuable in the brief period between his breaking of the career hits record and his public disgrace.) 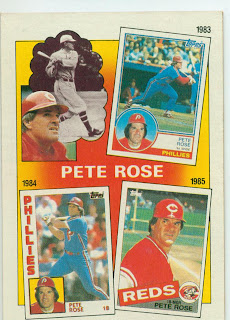 My main frustration in collecting arose from my biggest frustration in life at that time: I lived in an isolated Nebraska town. This meant that in 1987, my first big summer of collecting, I could never find packs of Fleer or Donruss cards, only Topps or small, cigaratte-pack sized miniserieses from the other brands. For that reason I have more 1987 Topps cards than of any other series; by the end of the summer there was a massive stack of pink planks on my dresser, the unpalatable pieces of gum that came in every pack. The gum's presence, however, meant that I didn't have to pay sales tax on wax packs of Topps, which cost a mere forty cents. Since I got paid the princely sum of two dollars every time I mowed the lawn, I could run out immediately to the local Walgreens and buy five whole packs, eighty five cards in all. 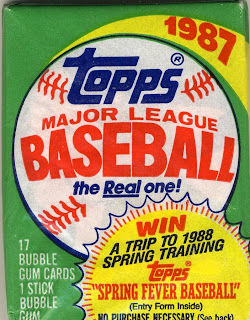 In 1988 I could at least get Donruss cards easily, and one of my proudest moments was when I saved up enough cash to buy an entire box of thirty-six packs. Opening, surveying, and organizing those cards occupied my mind and time for weeks on end. Being a ginger-complected kid averse to the blazing sun of a scorching Nebraska summer, this suited me just fine. At the beginning of the season I was enomored with the series put out by Score, the new kid on the block who put their cards in plastic rather than wax paper, a sign of greater sophistication in my eyes. The card buying highlight of that summer, however, was purchasing some O-pee-chee cards on a family vacation to Manitoba. In the Canadian version of Topps, the information on the back was in both French and English!

During the next year I went back to Topps and flirted a bit with Fleer. That summer I worked my first detasseling job, which meant that I had less time to pore over statistics and search out missing commons. My first big purchase with my first summer job was a Nintendo, and my adolescent mind concentrated on defeating Piston Honda in Mike Tyson's Punch Out, rather than cracking open new packs of cards. In retrospect, it looks like I got out at the right time. Upper Deck put its first series out in 1989, a set of cards geared less towards kids and more towards adult collectors. They charged 99 cents a pack, a high price that negated their obvious high quality in my eyes. Because I was just one of millions of avid collectors, the cards themselves are practically useless from an investment standpoint these days. However, I can't wait for the rush of memories they will bring me when I finally get to look at them again. 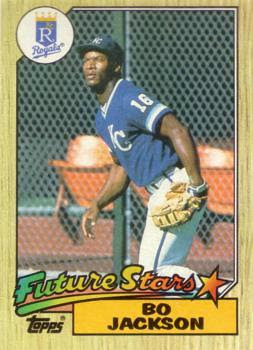 This was the set I cut my teeth on, and one that I think still looks great today. It was kinda retro, with the wood background and chunky 1960s font

This was the set I wanted really bad, but couldn't get in my hometown. Although I will always have a soft spot in my heart for Topps, the cardboard on Fleer's cards was less flimsy, and the backs were much more interesting and colorful. 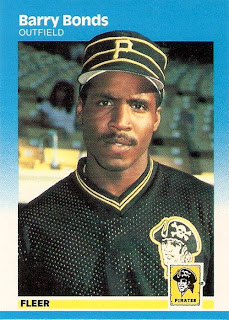 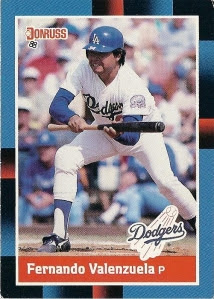 Nowadays this design looks dated, but at the time I thought it was much superior to what Topps and Fleer were doing. I especially liked that in 1988 Donruss decided to portray pitchers like Fernando Valenzuela batting, rather than on the mound. 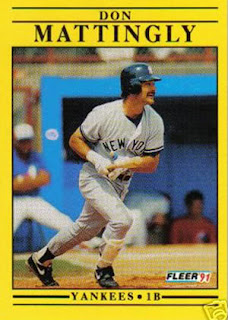 After my most intense card-buying days were over I'd still pick up a pack or two. Despite the praise I just lavished on Fleer, their all-yellow 1991 set stung the eyes. 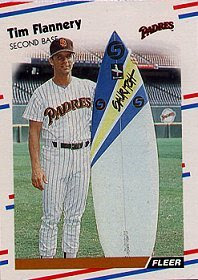 Doesn't this design just scream 1988? For some reason the 1988 Fleer cards had all kinds of oddball photos, like this one featuring Tim Flannery. 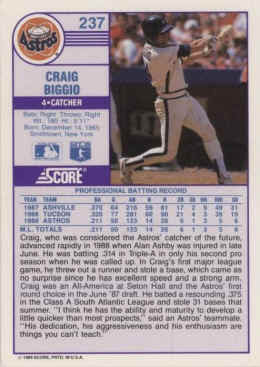 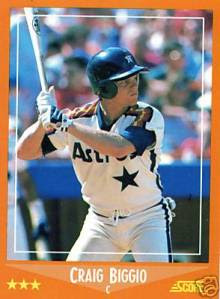 Although the 1987 Topps is my favorite for sentimental reasons, the title of highest quality set belongs to the 1988 Score series. All of the photos were action shots, much more interesting than the endless potrait shots Topps used in '88. The backs were the real revelation: a second color photo and in-depth narratives. Unlike the later Upper Deck, Score managed to walk the fine line between having a beautiful design and remaining a kid's item that could be bought with lawn mowing and paper-delivery money. Once baseball card companies stopped trying to appeal to that demographic, the most essential one for their survival, historically, the downfall really began.

Footnote: Those interested/obsessed with baseball cards must check out Josh Wilker's book and blog Cardboard Gods.  My musings on the subject are rather amateur by comparison.
Posted by Werner Herzog's Bear at 4:40 PM

When I think about the ponzi scheme mortgage scams inflicted on the american people in the Great Recession I can't help but reflect on the great comic book baseball card debacle of the 1990s. Whole collections "valued" at 50k but could only get 1,000 on the market.

Perfect timing for this post. Now that my book is out--seriously, I've seen it in a bookstore!--and I don't have any campus interviews (sadly, a bit of a relief after last spring's disastrous string of campus visits), I have turned my attention to things I used to do before graduate school. One of those is collecting baseball cards. The mid-sized city in which I currently live has a baseball card show TWICE A MONTH at the local Ramada Inn. No kidding. I feel like I have been magically transported back to 1991. Just this Saturday I bought a box of 600+ 1984 Topps commons and minor stars in mint condition. Perhaps the best $10 I've ever spent. This is one of my favorite sets, for sentimental reasons--my dad gave me two packs' worth of 1984 Topps (still not sure why he had them) around the time I started collecting in 1987. The 1987 set is also one of my favorites, for both sentimental and aesthetic reasons, although 1983 is maybe the decade's best. I could continue on with the merits of 1980s baseball card sets (recently I've gained a new appreciation for 1988 Topps) but I'll leave it at that for now.