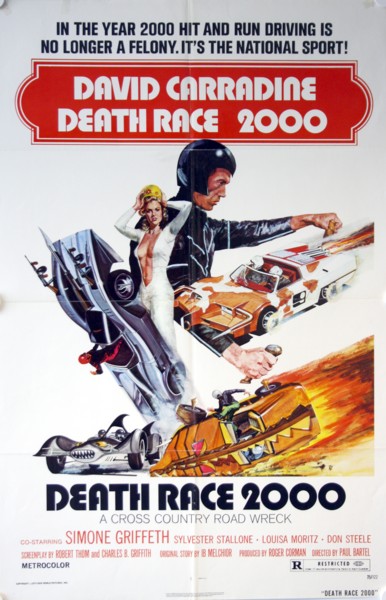 We are living in dark times. In these days of woe we need escapist entertainment to distract us. We need cheap thrills. We need dumb fun. We need trash cinema.

Back in the olden times trash cinema could be found in the drive in theaters across America. From killer robots to killer shrews to killer motorcycle gangs there were cheap thrills aplenty. The drive-ins hit their decline, but in the 1970s the grindhouses stepped into the breech. Exploitation cinema hit a high point worldwide, from Italian horror to Australian road flicks to American blaxploitation. A lot of film-makers raised on this stuff turned it into art cinema in the 1990s, with Quentin Tarantino being the most notable. In the 1980s the home video market undercut the grindhouses but opened up many more opportunities for trash cinema. A suburban dad might not go to the city to see an exploitation movie in a grimy cinema, but he would totally rent American Ninja.

I saw so many B-action movies as a kid because my father loved martial arts (he earned a black belt) and would watch anything with Chuck Norris in it. In the early days of cable in the 80s stations like WGN and TBS would show any old Charles Bronson or Lee Marvin flick, and I would watch it. Burt Reynolds became the biggest box office draw of the late 70s and early 80s via what's essentially a higher budget drive-in feature, Smokey and the Bandit.

While the 80s were a golden age of trash cinema, in the 90s it went into decline. Mom and pop video stores were replaced by Blockbusters. Those mom and pop places needed those B movies to have product on the shelves, a reputable megacorp like Blockbuster would just put up an entire wall of copies of Armageddon. The world of streaming that replaced the local Blockbuster store should have resulted in a trash cinema renaissance, but it hasn't.

On the big screen studios put out fewer and more expensive movies, with the cheap thrills of the past left aside. On the small screen there is an obsession with "prestige" television. Amazon and Netflix are swimming in cash, and so can bankroll attempts at recognition rather than a shotgun blast of B movie pleasure.

Of course, a lot of this "prestige" television has grown stale and formulaic and self-serious to a self-parodying level. I'm honestly bored and tired of it. America wants, nay craves trashy cheap thrills, not yet another group of stiff-lipped royals or criminal suburban dads. If you want to know what you're missing, watch Electric Boogaloo on Netflix. It is an amazing documentary about Cannon Films, the ultra-productive schlock producers of the 1980s led by the undaunted Golan and Globus. It's made by the same people responsible for Not Quite Hollywood, a similarly engaging look at Australian genre cinema in the 70s and 80s.

Here's some great clips to tide us over until we get our trash cinema back:

Don't mess with a pissed off trucker! White Line Fever is a secret blue collar masterpiece

Before he was the Bandit, Burt Reynolds was Gator. Both films also featured themes by underrated country singer Jerry Reed, who also starred.

1970s trash cinema, when Joe Don Baker could be an action hero.


The one and only Pam Grier


Death Wish 3 is grotesque, what a friend called "a Trump speech given sentient life." Trash cinema should occasionally make you feel icky for watching it.