REM, "You Are The Everything" 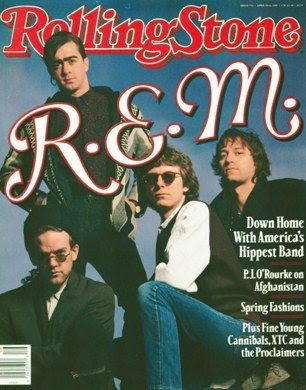 1989, When the cover of the Rolling Stone mattered

Back when I was 15-16 years old, no band mattered more to me than REM. In my isolated Nebraska hometown they were pretty much the only band from the postpunk underground that I could hear on my local radio station and see on MTV outside of 120 Minutes until "Smells Like Teen Spirit" dropped like bomb in the late autumn of 1991.

During the preceding summer a great chunk of my summer job money went to buying the band's entire back catalog. Of all of their albums I purchased that summer, Green is perhaps my least favorite (though I still like it.) At that point in REM's career they had graduated out of the college rock circuit into the arenas due to "The One I Love" off their previous album and "Stand." Green was the last of a trilogy of more straight ahead rock albums (also including Life's Rich Pageant and Document), turning away from the stranger sounds on their early records.

The band would turn from the rock to folky and, ironically, greater fame with 1991's Out of Time and 1992's Automatic for the People. I call those the "mandolin albums" due to Peter Buck's infatuation with that instrument at the time. This missing link is a song on Green, "You Are The Everything."
It is one of my all time favorite REM deep cuts, and brings out an element of the band that always spoke to me: their rural vibe. Much was made of the fact that they hailed from and continued to live in Athens, Georgia, rather than the big city. The Gothic weirdness of rural America is embedded in their best music, and having grown up in a small town, that really grabbed me.

"You Are The Everything" starts with the sound of insects chirping in the dark, and I have always pictured the sound of my parents' back patio on a summer night whenever this song plays. There is an air of mystery in the haunting harmonium and mandolin. For lack of a better word, REM perfected the use of mystery in their music, of creating an uncanny feeling. Michael Stipe's poetic lyrics, never straight-forward and always open to interpretation, were a key element in this. In the early days he mumbled them, making it obvious that feel and impression, and not literal meaning, were what he was going for. By the late 80s the lyrics were easier to make out, but not always to interpret. This song expresses a kind of despair and fear, and has great evocative Stipe lines like "all you hear is time stand still in travel" and "eviscerate your memory." The "you" in the song is amorphous. Is he talking to his sister about a childhood road trip? A friend? A lover? Despite the talk of despair, there is warmth in the music and Stipe's voice. The talk of finding comfort and hope amidst the fear makes this song pretty apt for these times.
Posted by Werner Herzog's Bear at 4:57 PM