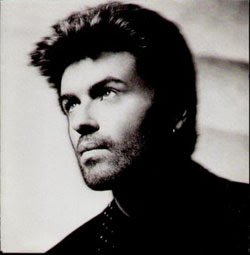 This has been a bad week for celebrity death. Carrie Fisher died today, just two days after George Michael, two people who had an impact on me in my formative years. Wham!'s Make It Big was the third tape I ever owned, something that later embarrassed me after I went punk in the early 90s. Nowadays I am mature enough to recognize that it was a cut above the other over-produced, glossy 80s pop of the mid-80s. George Michael was heavily influenced by soul music, and he sang in a soulful style that was in no way derivative or tinged with the "love and theft" dynamics of so many white artists influenced by black musicians. I should also add that as a boy I failed all the metrics of young male masculinity, and thus was interested in men like George Michael who seemed to stand outside of the usual gender norms. Prince's overt sexuality kinda scared me, so George Michael was more my speed.

After hitting it big with Wham! and then getting even bigger as a solo artist with the Faith record* he took some time off and came back with Listen Without Prejudice, one the first CDs I ever bought. It came out in 1990, a dark and moody album that was just a little ahead of the more serious direction that a lot of music was going to take after the dayglo 80s. This was a million miles from "Wake Me Up Before You Go-Go," more fully in the direction he'd taken with "Father Figure." "Freedom 90" was the one real hit from the album in the states, and before I discovered REM, The Doors, The Clash, and Nirvana in 1991, it was among my favorite jams.

"Mother's Pride" was the darkest and most affecting song on Listen Without Prejudice, the story of a mother reluctantly sending her boy off to die in war, unconvinced by the narratives of noble sacrifice. It is a beautiful song backed by spare piano and pan flute. Unlike other explicitly political songs of the time, Michael does not hit the listener over the head, he subtly makes the point that wars have consequences and demand sacrifices that are unnecessary. It's a song that sends a chill down my spine. I listen to this and think that George Michael was a helluva singer, and someone who should've been taken a lot more seriously. RIP

*"Monkey" is highly underrated, in my opinion
Posted by Werner Herzog's Bear at 8:24 PM