A Letter From Nebraska 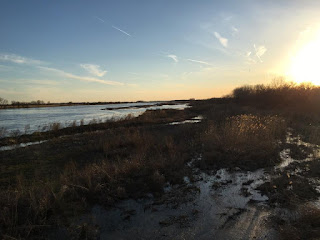 I arrived back in the Cornhusker State on Saturday, and so far have really been enjoying my time here. Spending day after day commuting to New York City and enduring its crush and push then coming home to parent two amazing yet rambunctious three year olds with my equally exhausted spouse can get really tiring. Last week I got to spend a day just exploring the city, which was helpful, since I could exult in New York's energy without feeling like a rat in a maze. Nevertheless, I needed to get some peace and quiet.

That exists in abundance in my home state. Getting off of the plane I was struck, as always, by the immense expanse of the sky, a sky so huge to seem threatening. When you are in Nebraska you get the feeling that the towns and cities are a middle finger to nature, which obviously never intended such things to exist here. That ever-present tension is responsible in large part for the humility of people who live here. You know full well that the wind and sky are permanent, and you are simply a temporary occupant of their space, and are there at their discretion. Occasionally a tornado comes around to remind you of that fact.

We landed in Omaha about 6:30, and that feeling of smallness got much more intense after the sun came down and we were driving west of Lincoln. It had been an overcast day, and the clouds blotted out the moon and the stars. Miles from any city the darkness was positively primeval, a kind of darkness that I had forgot could even exist in the world. It was so dark I couldn't see my daughters in the back seat, despite being on the one and only major interstate highway in the state. Under that huge dark sky you can feel as if the world outside of your car has simply disappeared. It felt good to be so isolated, the polar opposite of being packed cheek to jowl on the 2 train with someone's elbow in my kidney.

Easter morning I walked outside and smelled an old smell I had almost forgotten about: cow manure. My parents' house is near the edge of town, and just a few miles southwest there's a big feedlot. On the rare days the wind comes out of that direction, the smell saturates everything. As a child I hated it, but now I have to admit I exult in it a little. It is a wonderfully earthy smell, without the sickening burn of the ammonia in pig manure. And it was a welcome change from the unnatural chemical smells of New Jersey or the fuggy miasma of Penn Station. More old smells awaited, from the incense at Easter mass (used perhaps overzealously by a young priest) to my mother's ham baking in the oven.

Even better than the smells were the sounds of my daughters playing enthusiastically with their cousins. It made me feel a bit guilty that they only ever see them about once a year. I was lucky enough to have lots of great cousins, which made going to family events something to look forward to, rather than dread. I feel like out in New Jersey, where they don't have any cousins, that they are missing out on something important. My wife and my parents and I are currently plotting ways to get them out to Jersey this summer. Maybe we can introduce them to what real pizza tastes like before it is too late.

The smells of manure, incense and ham are all memory triggers, and coming home can be difficult for me sometimes because it reminds me too much of the person I once was. My home life was great growing up and I was lucky to have such caring parents and siblings and a tight extended family. However, much of what happened outside of that cocoon was shit. We walked all the cousins over to my old elementary school on Sunday to use the playground, and as I walked past the brick wall outside of the cafeteria I vividly remembered the time a kid shoved me, causing the skin on the tops of my knuckles to rip apart. I saw the kickball field where the other boys in the sixth grade banned me from playing with them during recess. I saw the spot in the schoolyard that very year where a bully literally spat on me and I finally cracked and started going after him. I wish I'd had the nerve to do that more growing up. I was a passive child, probably somewhere on the spectrum, and thought ignoring the bullies would make them go away. That passivity in my youth held me back so much in so many ways, from an inability to ask girls out to an inability to stick with student journalism because I was mortified at asking people questions. In my time growing up outside of my family I was as lonely and lacking in confidence as someone could be.

My dad showed me an old videotape of us playing a game of touch football with some of my relatives in my grandparents' farmyard when I was 16. I was a bit horrified by the gangly dork I saw before me, but watching it made my father really happy. I saw on the video that I managed to throw a pretty wicked bomb to my cousin for a touchdown, and started to feel a little bit better about myself. After all, I spent years and years pushing to not be that gangly, withdrawn dork. I'd like to think I've been largely successful. Coming home has been so relaxing as an escape from the stress of my daily life, but also an uneasy reminder that it took getting away from it for me to have any chance of coming into my own as a human being.
Posted by Werner Herzog's Bear at 8:28 AM