The Need For A Civil War Memory Offensive 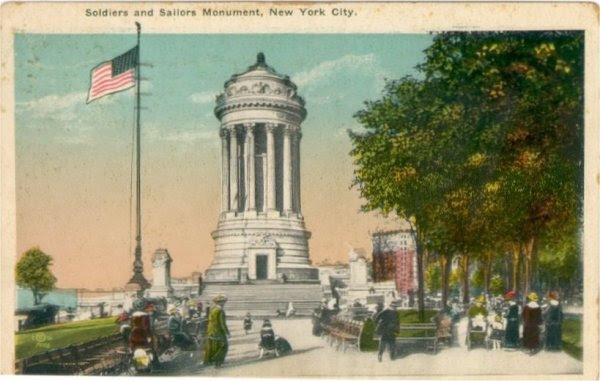 If you travel to the Upper West Side of Manhattan and stroll along the paths in Riverside Park, you might come across two massive monuments to the Civil War: the Soldiers and Sailors Monument, and Grant's Tomb.  The former is a towering structure honoring the Union troops who served in the war, a Beaux Arts beauty in its time that now looks awful today with cracks, weeds, and poorly covered-up graffiti.  Grant's Tomb has been cleaned up, but this gorgeous monument (built with the help of fund raising by the grateful African American community in New York City) is barely kept open by the National Park Service.  If you travel to the South, you'll notice that similar monuments to the Confederacy are kept in gleaming shape, and even battlefields managed by the National Park Service will have museums that include varieties of reunionist and even Lost Cause ideology.  (Surprisingly enough, the museum in Vicksburg is not like this at all.)

There has been a lot of needed discussion in the aftermath of the Charleston terror attack about the Confederate battle flag.  I think that discussion needs to be converted into a Civil War memory offensive.  Ignorant people have been free to believe that the flag is a benign symbol of "southern pride" because those who sympathize with the Confederacy have had an inordinate influence on public memory of the Civil War.  Just witness Shelby Foote's heavy presence in the Ken Burns Civil War documentary, where he gave great praise to slave trader, war criminal, and Klan founder Nathan Bedford Forrest.  It has been so from the beginning, where 1915's infamous A Birth of a Nation presented a racist interpretation of the war and Reconstruction, and 1939's Gone with the Wind valorized slave-owners.

Those who rightfully sympathize with the Union cause (or more appropriately, the American cause) need to amplify their voices.  Many historians of the Civil War (rather than reenactor hobbyists) have been engaging with the public, more need to follow their example.  Teachers need to teach not just the battles, but the larger political and social aspects of the Civil War, and ground its causes without any doubt in slavery.  (Historians should assist in making materials that do this that teachers can use.)  Modern day Unionists need to do more to honor their own monuments, memorials, and heroes.  (I'm a fan of Ta-Nehisi Coates for many reasons, not least of which that he uses a photo of Grant as his Twitter avatar.)  Monuments like the Soldiers and Sailors Monument need to be repaired and used ceremonially.  (New York should also more formally memorialize the Draft Riots, but that's a whole other issue.)  In general, Reconstruction needs to be made much more legible to the public.  This crucial time in American history has been largely forgotten, and the few public narratives that exist still parrot a paler version of Birth of a Nation.

More importantly, many existing memorial sites related to Reconstruction and the Civil War need to be changed, and contemporary Unionists ought to fight for those changes.  For example, a friend of mine recently visited the site of the Colfax Massacre, a horrific act of violence perpetrated in 1873 by white supremacists against former slaves to destroy their political power.  This is what the state of Louisiana's official plaque looks like: 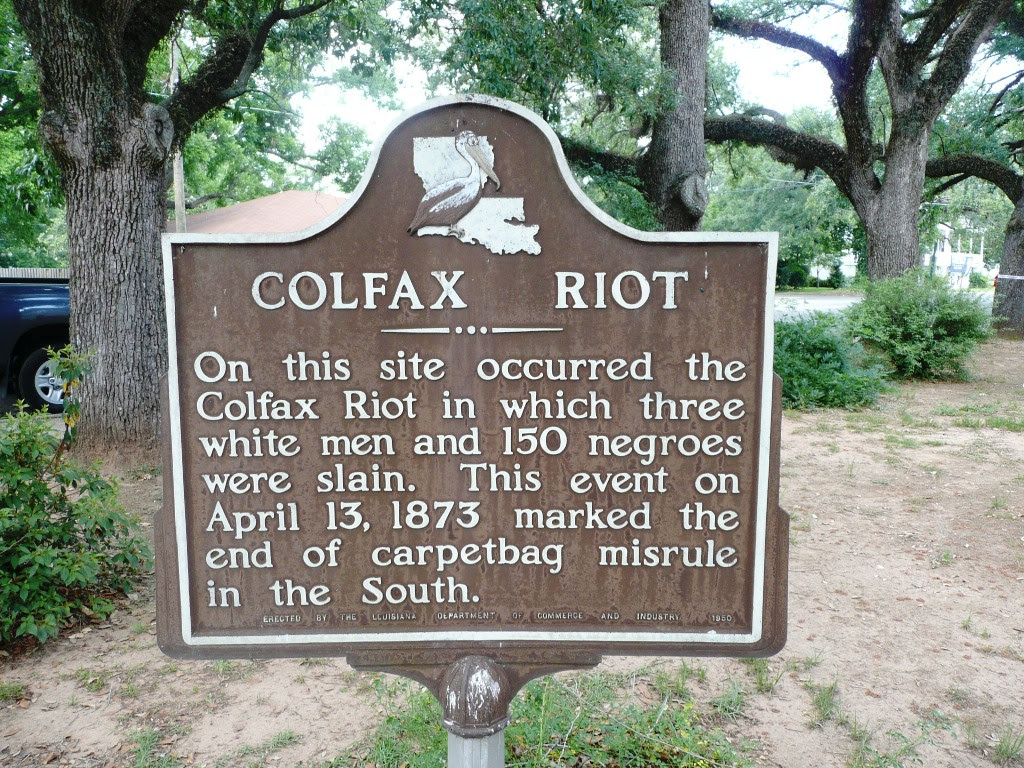 That's right, one of the worst incidents of lawless violence in this country's history is presented as a victory against tyranny.  It is absolutely disgusting that an event like Colfax is honored in this way.  This marker is only one of many valorizing white supremacy and its accompanying violence.  Yes, take down that traitorous, blood-soaked flag and burn it.  But also rip the historical narratives rooting that flag right out of the damn ground.
Posted by Werner Herzog's Bear at 8:39 AM

Though born and reared in Omaha, I was raised in the revisionist miasma you describe. For one thing, My mom was from Oklahoma, and one of her favorite sayings was, "The South's gonna rise again!" By the time I got to high school I did know enough to ask her if that meant we would own slaves, which shamed her and I didn't hear that so much any more. But the general culture of America was to soft-pedal the actual cause of the Civil War. I've read several articles around the web positing that The Southern Cause didn't so much lose as go underground and spread all over the country, and we're reaping the stinking harvest of that now.

Thanks for the informative post. I'm a daily reader and I really appreciate them.