The Interview And The Value Of Indies 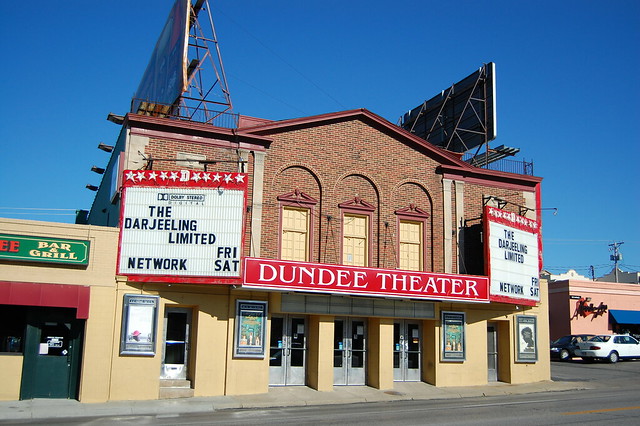 The Dundee Theater in Omaha, where I first gained a love of foreign and independent cinema

As I get older I fight the urge to sentimentalize the past, since that's the most annoying thing that aging people do.  That being said, I refuse to apologize for mourning the loss of independent book stores, video rentals, record stores, and movie theaters.  Books, film, and music matter a great deal to me, and I learned to truly appreciate these things with the help of independent businesses staffed by knowledgable people who did it out of love.  As a youth I could go and spend hours in such places in an almost trancelike state, high off of the association with all kinds of culture that I was just dying to absorb.  I bounced around a lot of places in my twenties and thirties, but wherever there was an independent book or record store, I had a home.

Of course, in America under late capitalism independent distributors of culture, like everyone else, are inevitably consumed by the great bloody Moloch of large corporations.  It has gotten to the point that corporations like Blockbuster and Borders, which destroyed the mom and pop places, have now been cannibalized themselves by the likes of Netflix and Amazon.  While these companies tout their convenience and the breadth of what they offer, they also act with little respect for the cultural commodities they sell.  Take for example Amazon's feud with Hatchette, which made it difficult for readers to get the books they want because Amazon wants to squeeze publishers and bring them to their knees.  Or take Netflix, which often does not present its streaming films in the proper aspect ratio.  Regardless of these abuses, the behemoths triumph and put those who actually do care about books, film, and music out of business.

With all this in mind it was odd this week to see independent movie theaters come to the rescue of megacorporation Sony in the affair over The Interview.  Sony pulled the film once the large corporate theater chains refused to see it, evidently frightened of what could happen to their bottom lines and stock values if the threats of North Korean hackers turned out to be true.  Some indie theaters defiantly said they would show it instead, and were initially rebuffed, before being embraced by Sony.

I should preface what I am about to say by noting that I think that The Interview's portraying the assassination of Kim Jong-un is extremely wrong-headed, stupid, and tasteless.  I have also heard via the We Hate Movies podcast that the film doesn't really do anything to discuss the actual, horrific abuses of Kim's regime.  For that reason I find the notion that Seth Rogen has any real principles about taking on an autocratic, murderous regime to be specious.

All that being said, I found the decision by the theater chains not to show the film to be cowardly and setting a bad example whereby films could be stopped from distribution via hacking and violent threats.  I will not buy a ticket to see this turkey, but I am glad that people who want to see The Interview can see it, and that violent intimidation has not been allowed to win the day. If we didn't have any more independent movie theaters, then the film would have been suppressed, and the bad precedent set.

We need independent sites for culture for a variety of reasons, including things I mentioned earlier about how they foster community and deeper cultural appreciation.  Most of all, recent events have shown us that they are often willing to defend principles that corporate entities are too greedy or too chickenshit to care about.
Posted by Werner Herzog's Bear at 4:23 PM

10-4, I am in complete agreement. My wife and I are the only peeps we know who seek out indie films any more, and luckily they are always screened at one of the only places around, an Edwards 'Cinema Art' theater at UC Irvine here in SoCal.

Can't count the number of times we've seen spectacular films at this theater that literally disappear after a few weeks because there are no guns/loud violence/boob jokes every 20 seconds. Of note, 'Winter's Bone', 'Precious', 'Beasts of the Southern Wild', 'The Grand Budapest Hotel'. These are special films that the mass audience ignores with a vengeance unless/until they are recognized by the Oscars.

As for 'The Interview', many that I know who've seen it didn't go for any other reason than to say 'I saw it... FREEDOM!'. The larger issues are lost on them... they just wanted to be part of this story.