The Civil Rights Act And The Birth Of The Modern GOP 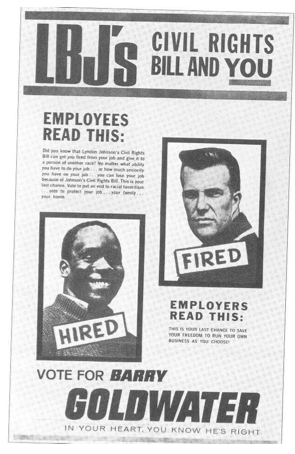 I just finished reading Rick Perlstein's Before the Storm, a riveting account of Barry Goldwater, the rise of the conservative movement, and the election of 1964.  It was oddly coincidental that I read this book fifty years to the week after the passage of the Civil Rights Act, an event that played a key role in the political realignment that Perlstein discusses.  One thing that amazed me about the book was that for a group calling itself "the party of ideas," the Republicans haven't come up with any new ones in a half century.  It's all there in '64: reduced regulation, privatization of Social Security, tax cuts for the wealthy, aggressive foreign policy, high defense spending, "law and order," blaming the "liberal media," comparing all government initiatives to Nazism, and last, but not least, white racial resentment.

I'd always thought of 1968, and Nixon's Southern Strategy, as the crucial moment in the Republican Party's turn toward its current racial politics, and assumed that Goldwater picked up the deep South in 1964 based on his opposition to the Civil Rights Act on gnomish libertarian grounds (he had supported civil rights legislation on the state level in Arizona), rather than his active courting of the white South.  Reading Perlstein's book shows just how wrong I was.  Goldwater's campaign destroyed the old Republican party structure in the South, where African Americans had often played a prominent role, and Goldwater's supports trotted out the noxious rebel flag at their events.  Just like Nixon four years later, Goldwater used the "law and order" issue to exploit white racial fears while giving himself plausible deniability.

Of course, the Democrats weren't blameless.  They had been more than happy to caucus with the segregationist likes of James Eastland, and did not kick George Wallace out of their party.  Johnson did not seat the Mississippi Freedom Democratic Party at the convention  in 1964.  However, the Republicans made a craven attempt to win over white votes in the South and elsewhere by mining racial animus, and gladly welcomed the Strom Thurmonds of the world into their ranks.  As late as 1960 Nixon had tried to court the votes of African Americans, after 1964 those attempts at courtship would be mere cover intended to distract from the party's real racial politics and to avoid the stigma of racism.  (It was especially gut-wrenching to read about Rockefeller Republican and national hero Jackie Robinson being insulted at the 1964 GOP convention.)  Nixon's personal beliefs didn't factor into any of this; he changed course because the growing backlash would get him more power than the votes of blacks.

The GOP's capture of the South, which of course did not just happen overnight, has been the biggest reason for its success in the last forty years.  After forty years of being a minority in the House, the GOP has had a pretty solid lock on it since 1994.  Between 1932 and 1968, a Democrat was in the White House for 32 of those 36 years.  Since then, from 1969 to 2014, 28 of those years have seen a Republican president.

To be clear, the racial backlash was not just a Southern phenomenon, and it has also continued to this day.  Look no further than the attacks on the president, which have a much more vile and abjectly disrespectful tone than in years past.  (For example, a 4th of July parade in my home state of Nebraska featured a float showing the Obama Presidential Library to be an outhouse.) Think of Reagan's words about "welfare queens" and "young bucks," and his hardly accidental appeal to "states rights" in Neshoba County, Mississippi, site of the murder of Goodman, Schwerner, and Cheney in 1964.  Think of the birther conspiracies, Sarah Palin's talk of "real Americans," and the mobs showing up in Murietta, California, to assail immigrant children.  Think of the "war on drugs" and the prison industrial complex.  Fifty years after the Civil Rights Act we are seeing the latest, craven assault on voting rights.

Americans are alarming in their historical amnesia, and the legacy of the 1960s is no exception.  Many last week fondly remembered the passage of the Civil Rights Act, but acted as if the backlash it engendered, and that still fuels our politics, never happened.  Then again, one major political party still has a vested interest in keeping that history secret.
Posted by Werner Herzog's Bear at 8:21 PM

Wow! Where did you get that poster??

Found it on a blog via an internet search. By the way, I can't wait for your Reagan book to drop. I'm fascinated by his 1976 run, use of Panama issue and nationalism, etc.