Track of the Week: The Monkees, "Pleasant Valley Sunday" 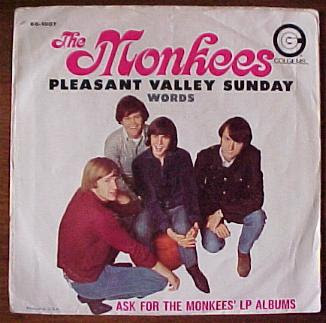 I picked up the most recent issue of Weird N.J. yesterday, and was interested to find out that songwriters Carole King and Gerry Goffin had lived for a time in suburban West Orange, New Jersey.  I was even more intrigued by the fact that "Pleasant Valley Sunday," one of the hits they penned for the Monkees, was inspired by West Orange, and Pleasant Valley Way in particular.  This fact hit home, since my wife and I are in the process of looking for homes, and it is likely that we will soon be leaving Newark's urban grit for the leafier environs of suburban Essex County.

It's a move that I am deeply ambivalent about, and my feelings can be neatly summed up by listening to "Pleasant Valley Sunday."  The song details a lazy weekend day in suburbia marked by consumerism, boredom, and complacency.  The narrator concludes, "I need a change of scenery," which is evidently what Gerry Goffin thought at the time about West Orange.  I am a little ashamed to admit this, but I was into the Monkees before I liked the Beatles, and this song was one of the first social commentary songs that I "got."  Even as an eleven-year old, I understood the message loud and clear.

As I aged into my teen years, I began to eagerly await the day I would leave my rural hometown and live a more bohemian lifestyle.  I read the Beats and Hunter S. Thompson, and even though I didn't drink or smoke weed or rebel in any real outward way, I saw myself living an unconventional life where I would be as likely to become a suburban homeowner as I would to become the king of France.  Currently I live in a densely populated immigrant neighborhood in a city that has become a byword for blight where the local white suburbanites fear to tread, so I guess I accomplished my mission.

It's not sustainable, though.  My wife used to live in our apartment by herself, now we've got the two of us, two children, a dog and a cat.  It's simply way too cramped to stay here, and buying in this neighborhood is surprisingly pricey.  I'd love to move to New York City, but the state law mandating that New Jersey teachers must live in state is an impediment, as well as the fact that NYC is becoming a playground for the wealthy where it is simply too expensive for two teachers to have a middle class family and live a tolerable life.  So we look west to the suburbs, where I hope to at least find a tribe of like-minded people there who don't buy into the values of "status symbol land"so that I won't be left looking for a "change of scenery."
Posted by Werner Herzog's Bear at 6:12 PM

Email ThisBlogThis!Share to TwitterShare to FacebookShare to Pinterest
Labels: music, new jersey, track of the week