I've written on this blog about bad album covers, but I figured I should share some of my favorites this time instead.  The vinyl LP sleeve is a large canvass with all kinds of possibilities that tapes, CDs, and downloads just can't do justice to.  This list excludes the obvious and more popular albums, since we all know what The White Album and Dark Side of the Moon look like already.  Here are some of my favorites that I've found rooting through the crates at record stores and garage sales.

Foghat, Fool For the City

I just managed to pick this one up today, mostly for the cover, although I do have a guilty soft-spot for 70s 8 track Camaro music.  I love the contrast of the urban scene with the rural past-time, and the mustachioed rocker look and solid steel cars that just scream 1975.

Porter Wagoner, The Bottom of the Bottle

Porter Wagoner is the king of gonzo country album covers, and this is his best.  The record is a concept album about alcoholism, and the liner notes are written in the character of "Skid Row Joe," a character from one of the songs.

We all know Willie Nelson as the braided, ganga-smoking country hippie.  Before the 1970s, though, his image was a lot different.  I can't imagine anything less counter-cultural than golf.  Or the shoes that he's wearing in this picture.  Maybe not a great cover in and of itself, but with the context of Willie's future in mind, I love it. 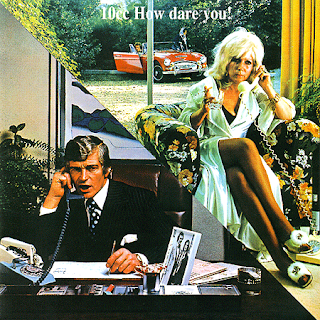 10cc were like the bastard child of prog rock and easy listening, as if Pink Floyd had collaborated with Barry Manilow.  Speaking of the Floyd, the folks at Hipgnosis, who designed all of their famous album covers, also did this one for 10cc.  The front cover is like a scene rom a soap opera.  The back cover like something from a Benny Hill sketch:

The gatefold, however, is the best.  It shows a bunch of people in a room all on the phone at the same time, and I take to be an oddly prophetic vision of the future.

This is not only the best record of the Mac's post-Peter Green pre-Buckingham/Nicks early 70s period dominated by Bob Welch, but it has a lovely, haunting cover.

Another Hipgnosis cover, this time on former Genesis frontman Peter Gabriel's first solo record.  It is a picture that makes a statement, since Gabriel used to be known for his outlandish stage costumes.  Here he is barely visible behind the windshield of a wet car in an image that captures the mundane despair of most daily life.
Posted by Werner Herzog's Bear at 11:09 AM