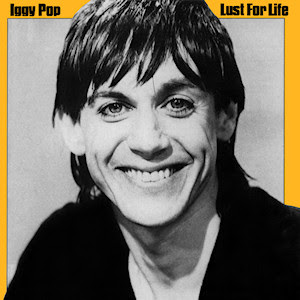 As I mentioned in my last post, my friend Dave passed away on Friday, and over the course of our friendship, we shared a lot of musical affinities.  Today, as I was searching Spotify for some of this stuff, I found the album that we may have listened to the most together: Iggy Pop's Lust for Life.

I had already been a big fan of the album-opening title song through the film Trainspotting, which the both of us knew practically by heart, especially the "choose life" monologue.  Unlike Pop's work with the mighty Stooges, or his prior solo album (The Idiot), the rhythm is jaunty, the hooks catchy, and there's nary a distorted guitar to be heard.  Sadly, these attributes have lead to this poppier side of Pop being used in all kinds of television commercials.  (Hard to imagine something like "Loose" being used to sell toothpaste.)  Evidently the people at Carnival Cruises glossed over the lyrics about "liquor and drugs" and "striptease."  Regardless of its adulteration at the hands of international capital, "Lust for Life" is indeed a big-beated, big-hearted ode to finding one's will to live after surviving a death trip.

The album immediately switches gears from joyousness to the kind of sleazy kinkiness Iggy was known for with the Stooges.  "Sweet Sixteen" opens with Iggy howling "sweet sixteen in leather boots" to a jagged riff and gut-busting, stomping beat.  Now that he's told his tale of redemption with "Lust for Life," Iggy spends the rest of his time describing the hell he escaped from.  Much the same comes with the junk-sick moan of Carlos Alomar's guitar sound on "Some Weird Sin," an ode to casual sex as psychotherapy.  Iggy ends a kind of trilogy of decadence with the album's fifth song, "Tonight."  A beautiful post-punk ballad buoyed by an airy synthesizer line worthy of Kraftwerk, it begins with the tale of a groupie's overdose.  It's obvious that the triumph over self-destruction described by "Lust for Life" came only after a great deal of pain, struggle, and narcotics.

Sandwiched between "Some Weird Sin" and "Tonight" on the first side is "The Passenger," one of Iggy's most enduring songs.  The deadpan narration and dark sound add up to a brilliant commentary on the modern condition.  The main character spends his life spectating, watching, looking but never actually participating.  In a strange way, it's a prediction of our current online world, where everyone's a consumer and a reviewer and a rater, flowing along to the next stimulation, drained of any real human connections or emotions.

It's pretty hard to match a side one this magnificent, and side two of Lust for Life is not up to the task.  If side one is an intense blast from a man who narrowly survived life on the edge, side two is a more light-hearted, goofy take on existence.  "Success," for example, starts pretty serious, but then gets silly with its call and response format.  The soulful ballad "Turn Blue," goes on too long, but has a funny aside where Pop intones "Jesus?  This is Iggy."  Dave actually did a pretty dead on impression of that line, one that would really crack me up.  Things get more rocking on "Neighborhood Threat," but not nearly as menacing as on side one.  The funky, skanky "Fall in Love With Me" closes out the affair with a much cooler version of the type of music that the Rolling Stones were trying to make at that point in their career.

Listening to this album since I left Chicago back in 2000 has always meant happy memories of Dave and I's adventures, including the glorious night we saw Iggy live in the flesh at the Metro.  Our hero turned in an absolutely awe-inspiring performance, every inch the rock and roll shaman we idolized.  Now, with his sudden passing, those happy memories are leavened with the bitter tears of loss.  It's a paradox of the kind presented on this album's cover, which has long obsessed me.  Iggy's eyes sparkle, and he smiles the kind of wide smile I associate with high school yearbook photos.  Yet the brightness of his smile and eyes are kind of creepy, almost psychopathic.  In our lives pleasure and pain are more mixed than they are opposed to each other, and this album supports that hypothesis more than any other.