The Crux of Our Low-Grade Civil War 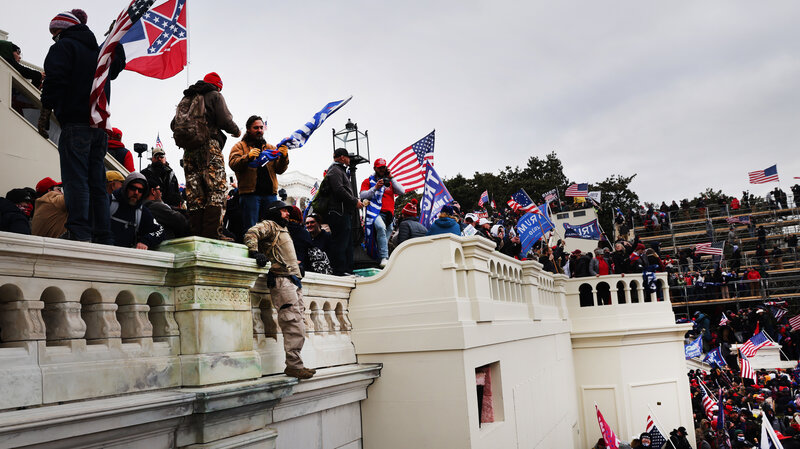 As I have said time and time again, America is engaged in a low-grade civil war, but most outside of the right wing are in denial about it. Some are so used to the way things used to be that they just can't see it, others are more actively sticking their heads in the sand because they are too chickenshit to fight.

This low-grade conflict has been going on for some time now. I would say it definitively popped above the surface when McConnell blocked the ability for Obama to name a Supreme Court justice back in 2016. Since then it has only continued with Trump actively attacking "blue states" as president and denying them COVID relief. We have seen in on the state level with rollbacks of voting rights intended to block Democrats from power, and from gerrymandered state legislatures that have stripped powers from Democratic governors.

After the 1/6 insurrection and the Republican obstruction of any investigation into it you would think that the reality of the situation was obvious to everyone in this country, but most of the non-insurrectionists just haven't taken it in. People like Joe Manchin are still defending the very filibuster that allows this naked attack on democracy to happen in the first place. Just as bad, national media fails to report the naked power grads on the state level as a coordinated assault on majority rule.

Some of this is the media's idiotic both-sides narrative, some of it is their fear of being called liberal, but I think most of it is something deeper. National reporters simply do not understanding the beliefs and mentalities of the people they are covering.

In the first place, they think Republican leaders are being pushed by a rabid base, when in fact there is hardly any separation in mentality between Republican politicians and the people they represent. (In fact, I would argue that those representatives are actually MORE extreme.) Second, they do not know the basic, fundamental belief that animates the Right's assault on democracy.

Put simply, most conservatives believe that any liberal political authority over them is illegitimate. It does not matter if a clear majority elected that authority, or if that liberal authority governs in a milquetoast, centrist way or even if that liberal authority does things that directly benefit them. The notion that they must submit and do something a liberal wants, ANYTHING a liberal wants is intolerable no matter how necessary. For example, conservatives were much more supportive of masks until Trump politicized them and made it seem like the "liberal" thing to do. The same goes for the very vaccines that the man they voted for funded. Political orientation is the biggest indicator of vaccine hesitancy.

Things get really crazy, however, when liberals try to enact their agenda. That is something that violates conservatives' fundamental understanding of the universe. The notion that their children might have to learn about the history of racism, or that transgender children be able to compete in high school sports makes them absolutely insane with rage and resentment.

The fervent belief that any liberal authority is illegitimate means that rigging elections, gerrymandering districts, packing courts, removing governors' powers, attacking the Capitol etc. is not only permissible, it is REQUIRED. They see themselves as the "real Americans" and anything against them as an attack by un-American forces. They don't have a problem limiting the votes of people they don't even think belong in the country in the first place.

This right here is the crux of the issue. The behavior of Republicans is not comprehensible unless observers actually understand the fundamentals of the conservative mind. Otherwise they are just groping around in the dark. It also means that there is not going to be an easy way out.

If the rest of us don't roll up our sleeves and fight we will be returning back to America's tradition of minority, Herrenvolk rule. If we do actually want to prevent that, there's a lot of uncertainty about what that could lead to. A definitive electoral win could remedy the situation, but the Senate, gerrymandering, electoral college, and voter suppression have made that impossible. In any case conservative authorities have basically signaled that they will be trying to invalidate elections going forward. The only thing any self-respecting progressive can do is to be prepared to fight back with all that is in us, consequences be damned.

Posted by Werner Herzog's Bear at 8:32 AM