A Legitimacy Crisis For All The Wrong Reasons 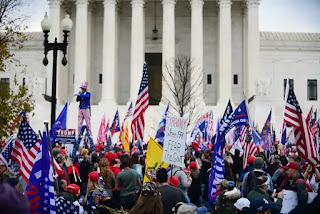 The crowds calling the system illegitimate are not who you'd suspect

It should not be a surprise that the American system of government is having a legitimacy crisis. After all, Democrats have won the popular vote in seven out of the last eight presidential elections, but only three members of the Supreme Court were nominated by Democrats. Two of the most disastrous presidents in this country's history were elected with a minority of the vote. The Senate, filibuster, and gerrymandering have allowed the minority party to either gain power or prevent the majority from wielding it. In states like North Carolina and Wisconsin Republicans have won legislatures via gerrymandering then stripped incoming Democratic governors of their powers.

It's very strange then that we are seeing accusations of illegitimacy not by the disenfranchised majority, but instead by the aggrieved minority. The fact that 126 House Representatives and 17 state attorneys general signed onto Texas' ridiculous challenge to the election result is truly staggering. They are the people who benefit from the undemocratic nature of the system, yet they are the ones fighting to tear it apart.

On the surface this doesn't make sense, but it does if you look at legitimacy through their eyes and take stock of the past thirty years of American political history. Jimmy Carter is the last Democratic that Republicans treated as legitimate. They impeached Bill Clinton over a minor offense after years of saying his win in 1992 was not legit because he won a plurality, not majority of votes. When Barack Obama took office they said he wasn't really born in America. They used the filibuster to block his legislation and would not even give Merrick Garland a hearing. Now they are openly calling Biden illegitimate before he even has a chance to take office.

What explains all of this is the conservative worldview where they are the "real Americans." In this framing liberals and those who vote for them are the other, something compounded by the fact that people of color and city-dwellers mostly vote for Democrats. Anyone who opposes conservatives is de facto illegitimate because they are not Real Americans. On top of that, Republicans refuse to submit to the authority of any elected Democrat because liberals represent an un-American, malevolent force impinging on them.

As I have said, many conservatives would literally rather die than do something a liberal asked them to do. The pandemic has offered proof. Conservatives have opposed mask mandates and refuse to cooperate with contact tracing, even as we are seeing a 9/11 worth of deaths every single day. Reason, science, and even self-interest are not adequate antidotes for this mentality. Any admission of being wrong means the entire basis of the their identity as the infallible Real Americans crumbles and so challenging their worldview only causes them to double down.

The current legitimacy crisis is going to be perpetual as long as the Republican Party and its allied media continue the narrative that they are the only people with legitimate claims to power. It will continue until the party and its adherents change, or their behavior finally breaks the system. Our political system certainly can't sustain one of two major parties actively trying to destroy it for very long.