Why a Landslide of "Rebuke" Was Never Coming 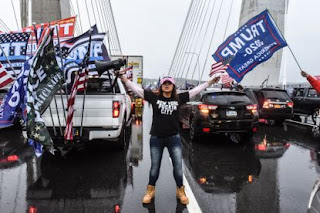 The political discourse is always irritating and tiresome, but sometimes it gets so ridiculous that I have to wade into the bullshit muck and make an intervention. In the wake of Joe Biden's decisive yet not landslide victory over an incumbent, lots of liberals and leftists have been beating their chests over the fact that it wasn't truly a "rebuke" of Trump at the ballot box.

I find this viewpoint completely perplexing. What country do these people think they live in?

George McClellan got 45% of the vote during the Civil War (in the North!) running against Lincoln while basically saying he would roll back emancipation. Richard Nixon expanded the Vietnam war to Cambodia and Laos, unleashed the FBI on dissenters, and abused his power and was rewarded with a landslide victory in 1972. So was Reagan twelve years later after he gutted the welfare state. Dubya did not get elected with the popular vote, but he won it in 2004 after the illegal, unprovoked, and disastrous invasion of Iraq.

In his four years in office Trump became the Republican party, and the party became Trump. That was made clear at the convention, when no platform was written. The party just re-upped their old one, because Trump WAS the platform. Plenty of Republicans who reluctantly voted for him in 2016 enthusiastically voted for him this time around. And why not? He gave them what they wanted. He cut taxes, packed the courts, punished immigrants, and made the liberals crazy. When people showed up to protest police brutality at the White House, he tear gassed them and held a Bible aloft. He was their id, and his "respectable" voters secretly delighted at seeing him do and say the things they might not do but wished they could.

In regards to his disastrous response on COVID, since when have Americans valued human life? Every years tens of thousands of people die from guns, drug overdoses, alcoholism, and automobiles and the response is basically "That's no big deal." It's been the same line about COVID. In fact, these same people are far more concerned about the restrictions meant to stop the spread of the virus than the virus itself. Anthony Fauci to them is just another liberal. They are united in their hatred and fear of liberals, and would literally rather die than do something a liberal asked them to do.

Trump's politicization of COVID did not help him with most of the electorate, but it allowed him to more firmly lasso his conservative base. For the anti-mask crowd that little piece of cloth on their face is an insult to their identity and their mythological narrative about themselves. They are self-reliant, rugged individuals, and no one has the right to tell them what to do, or even have any knowledge they must respect. This is also why they love the police so much, since they exist to visibly shackle and beat down the others who are not allowed to have access to this reckless freedom.

I wonder why so many are so incapable of seeing the people who surround them. For some it's ignorance. They live in blue enclaves and don't mix outside of them. However, it is also a function of people who know better about their friends and family but won't admit the ugly truth. There is no magic bullet. The vampire's victims don't come back to life after the stake is driven through his heart.

I would have loved a "rebuke" of Trump, but that was never coming. And yes, it disturbing that after all that he has done that so many would vote for him again. That's unfortunate, but it's also reality. If we are going to get anywhere, a lot of people are going to have to grow up and start facing things as they actually are in order to change them instead of finding solace in magical thinking.

Posted by Werner Herzog's Bear at 6:00 AM