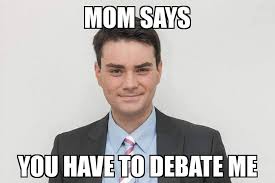 Friday was my last day of regular classes for the school year. It feels good to get across the finish line of a really difficult year. Going online presented a lot of challenges, especially when I had to teach debate over Zoom. My school's schedule has the year divided into five "mods," and the last mod has been completely under quarantine.

I did competitive debate for four years in high school and four years in college. It's an activity that gave an extremely withdrawn, nerdy kid a great deal of confidence in public speaking. In college it allowed me to travel to Ireland and fall in with a great group of friends. My mom was my high school's coach, and so this meant getting to spent a lot of quality time with her. One of our assistant coaches, a local college student, turned me on to philosophy, which I had never read before. My college coaches were wonderful people too, and I learned a lot from them.

It was a very good experience overall, but by the time I was done I realized that the whole enterprise was about playing games with rhetoric and not about actually changing the world for the better. In fact, too much immersion in debate can breed a certain kind of cynicism. I remember when we did a public debate on campus and my philosphy professor, who I greatly admired, attended and said the whole thing was "sophistry." That got me thinking abou the true nature of what I was doing, and whether it was the best use of my abilities.

When I parted ways with debate I was ready. After awhile, however, I missed the high I would get from the frisson of a hard-fought round. When I switched from being a college prof to a high school teacher I thought debate would be an interesting and enjoyable thing to introduce to my students. My school preaches progressive education, meaning that the learnign should be student-focused and geared toward exploration. Debate, when done well, certainly fits the bill.

However, I was also aware of how debate can so often work at cross-purposes with a progressive mindset, especially with learning for life. The world of competitive debate is so insular and byzantine that competitors rarely talk in ways that make sense to ordinary human beings. Policy debate, where competitors read evidence so fast that they can't be understood and keep trying to prove that the affirmative team's case will cause nuclear war, is the most infamous example of this. But even in other formats debaters talk too robotically and pepper their speeches with jargon because the judges are members of the same closed system. It's not necessarily a great education for learning how to engage in public discourse. At its worst its a training ground for new Ben Shapiros.

I really believe it can be if done well, however. When I taught my class I set about focusing on educating my students for life rather than competitive debate rounds. Since the school doesn't have a team, I could ignore the latter imperative. We used the Public Forum format, which is easy for the students to learn and allows for a range of resolutions. Each topic we debated was chosen by the students. The main topics ended up being the death penalty, cannabis legalization, and gun control. I maybe would have liked some less obvious topics, but they all allowed for lots of back and forth and an ease of entering into the topic.

For the last week of class I had initially planned on doing a parliamentary style debate on something related to the school. The more relaxed format would allow the students to branch out more and the topic would allow an emphasis on passion and humor. (There is nothing students are more poised to debate than their school's rules.) However, with the protests over George Floyd's death going on, a silly debate like that seemed pretty inappropriate. Instead I had the students all do their own speeches presenting what would have been their opening case for various resolutions related to the situation. If my class was supposed to be educating them for life, I thought it best to let them choose the position and build a case for a position they truly cared about, instead of just being assigned a side.

I was really blown away by the results. The speeches actually gave me a lot of hope, considering how hard the students worked in a short period of time, and how articulate they were in their calls for change. Considering the state of the world right now, high school students should be learning debate so that they can participate and make their own mark in the public sphere. If they come out of it thinking that the truth is immaterial to any debate, or that they have mastered a bunch of rhetorical tricks to win arguments, what have we actually taught them? The world has enough bullshit as it is.
Posted by Werner Herzog's Bear at 4:48 PM