Notes On A Trip To Pelham Bay Park

I am still on spring break, but unable to travel because my wife and kids are still in school. I have been recharging myself by taking a "staycation" of sorts in between getting the house organized and a head start on my school work. This usually involves taking the train from New Jersey to New York City and spending a day wandering around.

Yesterday I took a path I'd never taken before, in search of World War I monuments. I am going to be teaching a short spring session course on World War I and cultural memory, and I thought it would be great to take students to see some of their city's memorials. These monuments are so obscure that I realized that I'd never actually seen many of them. I started the morning by taking the 1 train from Penn Station to 66th Street. I sought out and found a couple of monuments in Central Park, one a memorial grove whose trees have not survived the ravages of time, the other a pretty standard bronze sculpture of soldiers charging.

The small scale of these monuments reflected that they were regimental in nature. I'd heard the biggest local Great War memorial was up in the Bronx, and so I grabbed the 6 train at 68th and Lexington. I deliberately stayed on the local, kicking back and reading a book and watching the people on the train and the Bronx pass by my window once the train crossed the Harlem River. I find reading a book on an empty local subway train to be remarkably soothing, it was about the most relaxed I've felt in awhile. I was traveling in that 9:30-10:30 sweet spot where the last rearguards of rush hour have faded away and there is a blissful stillness for those unchained by jobs to enjoy. 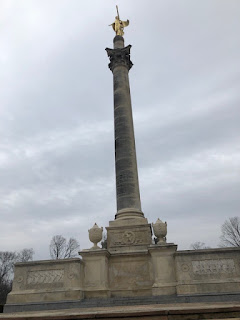 I got out at the end of the line, right by an interstate highway. Due to the decisions of Robert Moses and other planners to build highways along most of New York's coast line, it is a city oddly cut off from the water, despite being built on islands. I had to take a pedestrian bridge over the freeway to get to Pelham Bay Park. I was there to see the Bronx Victory Column, maybe the most substantial World War I monument in the city. It was easy to find, its gold statue shined bright, facing the highway. 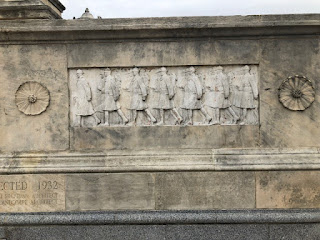 The monument is in remarkably good shape compared to other forgotten artifacts in the city like the crumbling Soldiers and Sailors Monument and the aforementioned grove without its trees. Perhaps that's because the monument is borough specific to the Bronx, and thus something the locals can take pride in. It also might be just because it's located in such an isolated place, and so is not a target for vandals. I certainly didn't see anyone else around while I was there, despite the many inviting places to sit. 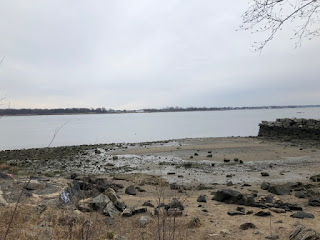 I was struck by the emptiness of the monument and the park. In the nation's most densely populated city, there was hardly a person to be found. I wandered until I found a path to the bay itself, since there was no signage to point the way. While sitting on a rock gazing absent-mindedly at the water somebody came walking by and I was completely startled, since I thought I was the only person around. On the way back I noticed an old brick wall, whose purpose I could not ascertain. There was a gate at one spot, but what had once been a path was overgrown. 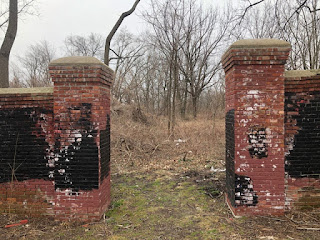 I thought this made sense in light of the monument. World War I is an almost completely forgotten event in American history, but the people who experienced it thought at that time that it was the most important thing that had happened in the world during their lives. As we all know, a much bigger war was on the horizon, and one that provided an easier narrative of triumph for Americans. World War I killed millions worldwide and over 100,000 in this country, but it got lost in the shuffle. It's fitting that one of the more substantial monuments to that war is located in a place that few people ever go.

I took another lesson as well, that most of what we care about is pretty ephemeral. Some days that thought is a sad one, but yesterday under gray Bronx skies it felt comforting.
Posted by Werner Herzog's Bear at 2:18 PM