Report From A Small Protest 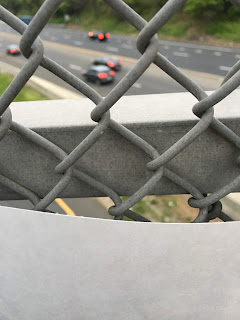 Donald Trump is going to be right here in New Jersey this weekend at his golf course in sleepy Bedminster. That also happens to be just down the road on I-78, the closest interstate to where I live. I heard from my neighbor about a protest this evening where people would stand on the walkways above the interstate holding signs as the motorcade went by. Full of zeal and angered by today's health care vote, I decided to go.

Things were not glorious. My neighbor had to beg off due to child care responsibilities, and since Trump delayed his arrival in New York to engage in his frat boy smoker/signing party, the motorcade was not going to come down the interstate during the 7-8 bloc where the protest was occurring. I still went to the overpass closest to my house, off of Burnet Avenue, feeling an obligation to bear witness on this dark, dark day. After getting my kids fed I quickly grabbed some poster board and made a sign reading "Health Care Is A Human Right" with red and blue Sharpies.

When I got to the overpass, it was empty. I sat in my car for a minute, then realized I had nothing better to do. I've also never been the type to be afraid to be alone. During my single days I would go to movies alone, go to bars alone, and even travel alone. So I stood there by the chain link fence, the wind blowing hard an unseasonably cold. Below me the massive river of traffic moved, small cars buzzing and big trucks rumbling. A handful of people honked, mostly those driving over the overpass. At one point a Union Police cruiser stopped by me and I feared the worst. He asked me if my sign was a marriage proposal (obviously he hadn't read it since he saw it from behind.) I said no, and showed it to him. For a brief second I could tell he contemplated hassling me about it, but thought better and drove off.

After about ten minutes another person joined me on the overpass, friendly and sheepish (like me.) We talked a bit about the protest opportunities this weekend in Bedminster, but she did not seem that interested in small talk. Being a woman alone with a strange man, I totally understood.

So I stood quietly with the wind knifing me, somewhat hypnotized for the cars and trucks rushing beneath. I wondered if people could actually see my sign quavering in the breeze. I wondered if it mattered. And I wondered if I was just tilting at a windmill this evening. I knew I was right to bear witness, but on this dark day I was reminded yet again that fighting the good fight does not ensure a victory.
Posted by Werner Herzog's Bear at 6:28 PM

Union County was a hotbed of Klan activity in the 20th century. Nice to see their grandchildren are still gainfully employed, I guess.

Keep in mind Union itself today is very diverse, including a lot of immigrants. Those

Much respect, you protesting anyway showed principle and a dedication to the dream of america. Change only occurs when people show up to protest everyday, not just for the "selfie" worthy events! Proud to have been your student!

Union County has always been diverse. Just segregated. It is special, though. Plainfield was the sight of the most successful uprising of the 1960s. They lynched a racist police officer for shooting a Black child in the back, stormed the National Guard armory, and held the police to a negotiated truce. They never did recover those guns.

Rich: That's an interesting story! And I meant to say in my earlier comment how Union the town is much more diverse and less segregated than the surrounding communities. A friend from Berkeley Heights calls it Berkeley Whites.

Miles: Oh wow, I didn't believe my former students were reading the trash I write online! Your words mean a lot to me. I hope I can see you at a future reunion.

A positive act done is still a positive act, even if no one saw it - and plenty of people saw yours. Kudos!