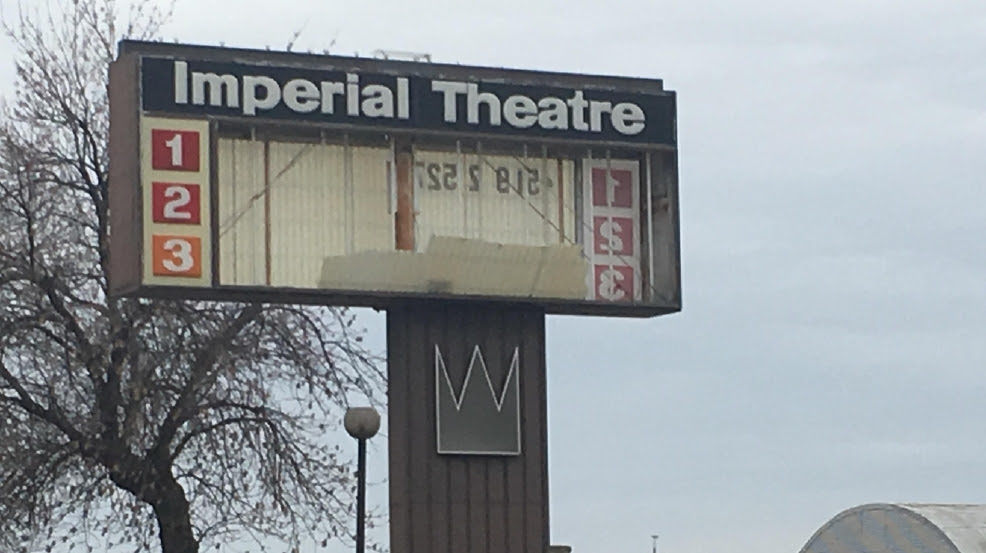 Yesterday  I got the sad news that one of the two movie theaters in my hometown of Hastings, Nebraska is shutting down. It’s the Imperial Theatre, a three screen theater build separate and behind the once bustling but now rotting Imperial Mall. The theater also happened to be in my part of town, so it's especially sad to see all the commercial development in that area go under.

The theater opened in 1983, and looks it, constructed out of dark brown brick with the kind of earth tones inside so favored in the interior design of the era. It was the theater of the future back then. One of the two downtown theaters dating to the 1920s soon shut down after the Imperial Theatre opened and became office space, the other shut down soon after. (The Rivoli was later remodeled and reopened in the 1990s. Now it is the downtown theater that has ultimately stood the test of time.) It is hard for me to believe that something built in 1983 can now be an obsolete ruin, but I guess I really am getting old.

Return of the Jedi was the first movie I saw there, right after school got out my first grade year. It was something I had been looking forward to with religious fervor since seeing Empire Strikes Back, and did not disappoint. Many of my favorite movies of my youth were first viewed in that theater, from The Karate Kid to Indiana Jones and the Last Crusade. It’s also where my folks took me to see Platoon, my first rated R film in the theater, which put a damper on my Reagan-era militarism.

In those years when I was old enough to go out on my own but too young to drive, I seemed to be there all of the time come summer. This meant seeing a lot of crappy movies among the good ones, mostly because I just wanted to see a movie. That trend sadly continued even after my access to a car expanded my options. The Imperial Theatre is also where I saw stinkers like Batman and Robin, The Karate Kid III, and Crocodile Dundee II. Then again, there was some delightfully cheesy stuff too, like The Last Starfighter and Monster Squad.

The theater was located in an area that was economically booming when I was younger, but now all the economic activity in the town has moved out to he cancerous growth of box stores on highway 281, the same boring collection of bland retail and Applebee's that sits outside of every American burg with over fifteen thousand residents.

I guess it was doomed to fail, sitting on the wrong side of a town that's on the wrong side of the interstate, which passes through the much more commercially swinging Grand Island, 24 miles to the north. And what should I expect? The town where I haven't lived full time for over twenty years is not the same place it used to be, and it would be silly for me to expect it to be. No, I can only sit with the memories of an aging man of what life used to exist inside the walls of a ruin. I also think ruefully of a town where more things seem to close than to open anymore. It's a tale that can be told in lots of small towns across Nebraska. I wonder what will be left of that world in twenty years.

Email ThisBlogThis!Share to TwitterShare to FacebookShare to Pinterest
Labels: me, memory, nebraska