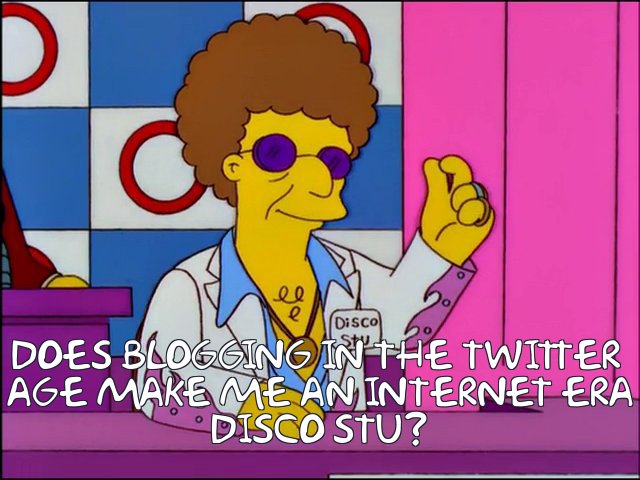 This right here is post number one thousand of "Notes From The Ironbound."  At moments like this, I do have to stop and think about just what the hell I am doing with my life.

I get between 5,000 and 8,000 views a month here, which actually isn't all that much. In the age of Twitter, blogging has become incredibly passe, especially a blog as unprofessional looking as this one with a weird title. Some days I wonder if I am just a pathetic relic of the oughts, a sort of internet Disco Stu. I'd like to get my stuff published in more notable places, but so far that's been going nowhere. I have resolved this summer to try to submit more pitches. Considering the barrage of godawful hot takes on the internet, I can't imagine how they can turn me down.

Hitting this milestone has me thinking about how I first started. This was not my first blog. I started right after the 2004 election, mostly to process what had just happened. I also used to send my friends extended rants over email, and decided that a blog would be a better platform for them. My first blog had the awfully unwieldy name "Fugitive Streets/Jackal Tombs," which I changed to the catchier "I Used To Be Disgusted Now I Try To Be Amused." That blog had a measure of success, but I had to kill it 2011.  A former coworker who had stabbed me in the back had previously been trusted with the knowledge that I was writing an anonymous blog that contained some pretty inflammatory opinions about academia and my own workplace. After my nightmare experience at my old job I needed to speak my mind without my former colleagues coming at me. One nasty comment on this blog makes me think that one of them found me, but I've deleted that post and brushed it off.

These facts make my continued blogging even more puzzling. Why keep going with something that hardly anyone reads and could be used against me? I think it comes down to the fact that I love to write about music, current events, culture, and history, and that I am not good enough, interesting enough, or connected enough to get published by others on a consistent basis. (I am very lucky to count the much more successful Chauncey DeVega as a friend, and he has given me many helpful signal boosts.) This blog is my turf. I can write and publish whatever the hell I want, and even if few people read it, I still get to derive a great deal of pleasure from the experience.

I really appreciate the fact that based on the comments and Twitter, I have some loyal readers. Thanks guys, it's good not to feel like I am just shouting into the void. I hope you stick around.

And while I am going to keep my current writing pace for this blog, this summer I think I really need to push myself out of the very cozy comfort zone I've established here, as Chauncey and others have urged me to do. If anyone can give me advice in the comments on how to do that, please let me know.

Email ThisBlogThis!Share to TwitterShare to FacebookShare to Pinterest
Labels: blogging, me

I don't remember how I found your blog, but that you're a fellow Nebraskan (though you no longer live here, and I do - after spending pretty much all of the 1970s out-of-state), piqued my interest. Nice to find a *liberal* Nebraskan, no matter where they are! I enjoy your rants and your musings. Keep it up!

I like reading your posts. It's time well spent. As a fellow Gen Xer.and also from South Jersey especially the posts on eighties pop culture. I found your blog via Chauncey DeVega's

I wouldn't call this blog a relic of anything. It is instead a welcoming demonstration of continuity in an ever-changing media landscape. No alarms. No surprises. Just really thoughtful writing from a good friend. Keep it up!
debbie

"If anyone can give me advice in the comments on how to do that, please let me know."

You have a tone similar to Robert Ebert. Not blowing smoke up your butt. Just stating a fact. Have you read his autobiography? If not. Do so. You will like it.

Run with it. That NY Times or Wapo or Atlantic piece is just there. Most hot takes and other writing just stinks. The lane is so open. Write one thing and go for it. Then another. Hell, Jacobin would love you. Medium too or something in the Chronicle.

I happened upon your blog a number of years ago and have been a steady reader ever since. Keep up the good work, I thoroughly enjoy it.

I am a fan of your blog, opinions and writing style. I too find that blogging gives me an outlet for my perspective on things, and it helps to solidify thoughts that are otherwise scattered and vague. If you keep posting, we'll keep reading. Thanks for that!

Thanks for the kind words folks, though I was not fishing for compliments, I swear.

Chauncey: thanks again for promoting my work. That Ebert comparison, wow. I guess the style of writers that I admire and took cues from really rubbed off. I used to devour Ebert's reviews and columns.