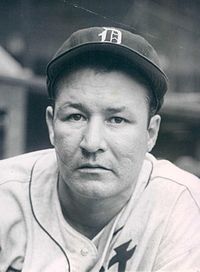 Rudy York hit 18 home runs in August of 1937 as a rookie.  He is also one of the most prominent American Indian baseball players of all time

August is my favorite baseball month of the regular season.  It comes before the start of (American) football season, giving the events primacy in the sports world.  Most of all, it is when things really get serious.  As I've mentioned before, the baseball season is not a matter of two halves, but of three parts.  The April-May part is subdued and hopeful in the early spring cool breeze, a time when surprise teams might briefly hold the spotlight and teams with high expectations are allowed to stumble a bit.  June-July is the winnowing phase, a proving ground where the teams that are going to have a shot emerge, and the also-rans make themselves known.  August-September is endgame, when the contenders fight to make the playoffs and the cellar dwellers have a hard time drawing a crowd to the park.  It comes after the trade deadline on July 31, when teams on the bubble scramble to get that last piece of the puzzle and the front runners stock up on spare parts.

It has been a few years since I've been able to enjoy August baseball as a fan of a contender, so seeing Noah Syndegaard blow his 109th (and last pitch) right by the fearsome Bryce Harper on the way to a Mets victory that put them tied for first with the Nationals on Sunday was a special treat.  The Mets haven't even had a winning season since 2008 and a playoff spot since 2006.  My other team, the White Sox, are indeed losing again this year, but not totally out of contention due to a strange bunching around the middle in the American League.  In any case, they haven't made the playoffs since 2009.  It feels good to watch these late season games with some emotional investment, rather than resignation.  When Syndegaard made the mighty Harper look a fool I jumped up from the couch and punched the air, which doesn't really happen in June, even in a similar situation.

When a team is contending the sometimes sleepy, laid back atmosphere of the ballpark is completely altered into a fervent, high stress zone where fans are keyed into every pitch.  The crowds at the last Mets home stand were going absolutely bananas, and sustaining loud chants of the sort usually reserved for soccer terraces.  Last night's game on the road in Miami showed the flipside of this phenomenon, where the Marlins barely drew a crowd on a Saturday night against the Mets, and quite a few fans were rooting for the opposing team.

The way fans of contending teams root is never the same, however.  When I was at AT&T Park in San Francisco last week the place was packed, but the Giants fans were fairly composed.  They had the confidence and swagger of a team that has won three championships this decade, whereas Mets fans are currently sloughing off a decade of futility and frustration in an ostentatious manner that fans of the likes of the Giants or Cardinals would likely find distasteful.  Thus is always the case with long-suffering fan bases.  I had just moved to Chicago during the end of the 1998 season, and Cubs fans treated the chance at a wild card spot like the Second Coming.  (I still remember watching the infamous Brant Brown botched catch and actually hearing the sound of a collective stomp and "aw fuck!" in the air.)

Baseball is a long season, from the first signs of life after winter to when the leaves begin to fall.  Hardcore fans watch a lot of games, a lot more than fans of any other sport.  It is a sport where one has to keep one's full emotions in reserve, because to treat every game with intensity will burn you out before Memorial Day.  Once August comes, it means either letting baseball fade into the background or, if your team is in a pennant race, suddenly throwing one's soul into each and every inning.  After Sunday I'm all in as far as the Mets are concerned, hopefully now that they have my heart, they won't break it.
Posted by Werner Herzog's Bear at 12:18 PM