Baltimore And The Necessity Of History 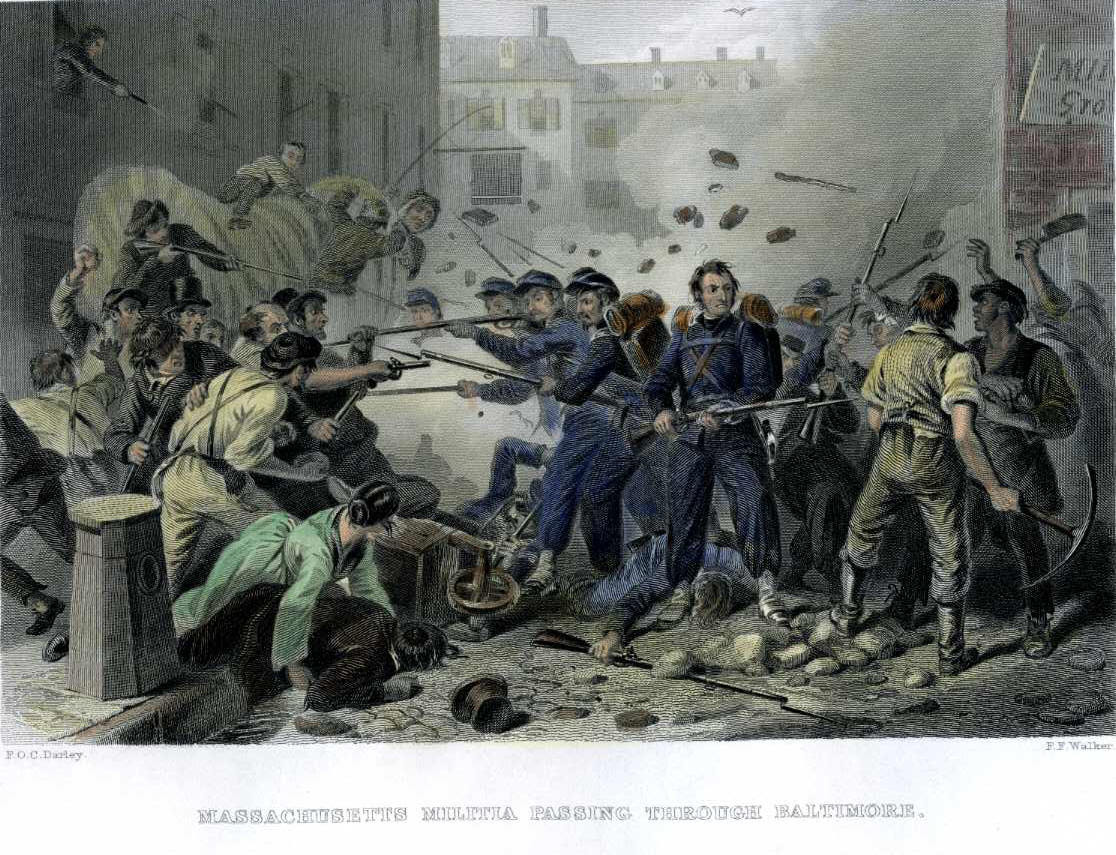 After Fort Sumter, the first blood shed during the Civil War was on the streets of Baltimore when local secessionists attacked Union troops from Massachusetts

I wrote here back in November how events in Ferguson prove the need for history, and here we are again with unrest roiling Baltimore after yet another police killing of an unarmed black person.  Yet again the news media presents the anger, protest, and violence in response as if it’s completely divorced from any larger historical or sociological context.  Baltimore proves yet again why history urgently matters.  The world we live in is the product of the past, and the only way to understand that world properly is to know its history.

Baltimore is not a unique city in its problems.  After World War II several factors converged there and in many other American cities.  African Americans migrated in to get a better life, only to find discrimination and that many of the industrial jobs they sought quickly going away.  At the same time, suburbanization, fully funded by the government via interstate highways and subsidized home loans, led to white flight and a massive drop in the tax base and with it, city services.  This included schools, which now did little to offer opportunities to get out.  The government, by working with “red-lined” maps, did not extend generous loans to black urban neighborhoods, abetting their physical deterioration.  To make matters worse, “urban renewal” bulldozed neighborhoods and placed people in alienating public housing blocks that were cheaply made and poorly maintained by design.

All the while the new impoverished urban landscape was patrolled by mostly white police officers above the law with undisguised contempt for the people they were supposed to protect.  That unhappy combination of lawlessness and contempt led to cops murdering and getting off, which in many cases was the match to light the fuse of several urban riots/uprisings in the 1960s in just about every major American city.  In the aftermath of the destruction, little or nothing was done by government to repair the damage.  (I drive down Springfield Avenue in Newark quite regularly, and the scars of '67 are still there despite some of the neighborhoods being revived.)  It was as if a hurricane or tornado came through, and nothing was done to help in the aftermath.  The aftermath brought further suburban flight (now including middle class people of color) and an even bigger cratering of industrial jobs.  Then, in the 80s, came the War on Drugs and the incarceration state, which made police behavior in prior eras seem positively polite by comparison.  After that came "Broken Windows" policing, feeding more and more young people into the maw of the prison system, which came to house a higher percentage of the nation's population than in any other country.  From the 90s onward, as urban life suddenly became attractive again to the affluent classes (in large part due to the effects of the new policing policies) the less ravaged neighborhoods experienced a massive wave of gentrification, pricing many people out of their homes.

Is it any wonder that people living in places so thoroughly oppressed and abandoned are reacting so angrily?  As my friend Chauncey DeVega has expressed, the real wonder is that the scenes in Baltimore aren't much more common.  When the media covers urban unrest, it tends to just excise the larger historical context, which of course delegitimizes those making the grievances.  It presents the tragic deaths of people like Freddie Gray as an isolated incident, not the product of a historical and systematic system of oppression and inequality.  This misperception is incredibly powerful and detrimental.  It is up to my fellow historians to put themselves out in the public to set people straight, and for the media to actually listen.  If that doesn't happen, the fear-mongers and reactionaries will win.
Posted by Werner Herzog's Bear at 6:48 PM

It has baffled me for decades what "journalism" and "communications" programs in our colleges and universities are teaching their students. It has often seemed to me that the lesson of Bob Woodward and Carl Bernstein that young journalism students took was not of integrity, diligence and courage, but that if you do something splashy you get the money and glamour and maybe Robert Redford will play you in the movie. Since Watergate it seems to me that our reportage in all media has been a steady slide to the toilet, with hairdos and suits and nice white teeth being the most important things. How could the teachers fail to convey how vital a *real* 4th Estate is to a free nation?

"When the media covers urban unrest, it tends to just excise the larger historical context, which of course delegitimizes those making the grievances. It presents the tragic deaths of people like Freddie Gray as an isolated incident, not the product of a historical and systematic system of oppression and inequality. This misperception is incredibly powerful and detrimental."

Hit the nail on the head here. I once thought it was a sign of how lazy the reporting class has become. But now, I sincerely believe it is by design. There has to be a scapegoat and undocumented Latinos can only go so far. Whereas, history has proven that you can practically visit any form of injustice on blacks and the a great many in this country will simply shrug and find a way to minimize it.

Truth there. The Media are now complicit in the ongoing atrocity. And it doesn't even have to be the "interfaces" - the talking heads "news" anchors and reporters. There is a nonstop supply of airheads lusting for fame that are only too happy - indeed, are qualified for nothing else - to parrot whatever the powers' lies and distortions du jour are. And too many white Americans don't question it, because we've never lived in the universe our black countrywomen have always had to.