Track of the Week: Genesis, "Dancing With the Moonlit Knight" 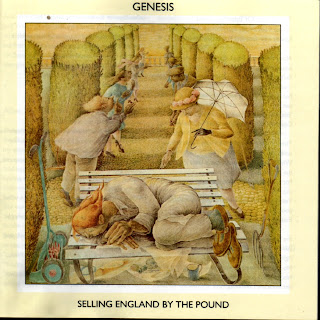 Coming of musical age in the 1980s, I thought of Genesis as a Phil Collins side project, and Peter Gabriel as the most cutting-edge artist outside of Prince to get regular Top 40 airplay.  One day I saw something on MTV that referenced Genesis' history that showed Peter Gabriel fronting the band in the mid-1970s wearing some kind of crazy costume like the guys in the Fruit of the Loom ads.  The music was absolutely wild, a million miles away from polished, straight-ahead pop rock like "Invisible Touch" or world music inflected tracks like "In Your Eyes."  I was intrigued, but never explored vintage Genesis because I soon became too punk rock to be caught listening to prog.

Years later, living in Grand Rapids, I had access to a fantastic library, and checked out Genesis' Selling England By the Pound album on a lark, and was immediately entranced.  It opens with "Dancing With the Moonlit Night," which starts with Gabriel mournfully keening "Can you tell me where my country lies?"  The song references Britain's economic and political turmoil of the 1970s, but does it in a very different fashion than the later punk rock thrashings of the Sex Pistols.  Instead of three chords and a cloud of dust over two minutes, we get operatic dynamics, time-signature changes, and extended soloing over eight minutes.  It's a rousing, beautiful song that's one of the great moments of ecstasy that make prog's pretentions and preciousness worth wading through.  Listen to the whole album, you won't be disappointed.
Posted by Werner Herzog's Bear at 8:34 PM