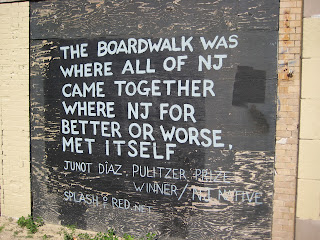 Up here in Newark we've spent the weekend getting ready for the oncoming hurricane.  Bottled water has been purchased, home containers filled, baby formula acquired, and a stockpile of non-perishable goodies from Trader Joe's built up.  In addition, we've also got some limes, rum, and grenadine to make some hurricanes, in honor of the storm and tradition established in our household last year during hurricane Irene.  At first I thought this time around would be much easier than Irene, but now it appears that Sandy has moved out over the ocean, and will come crashing down with her full force on the Jersey shore.

This is a region that has been woefully maligned by the show of the same name.  For most New Jerseyans, the shore is not a place to get stinking drunk and play out ethnic stereotypes, but a glorious yet nearby and accessible summer escape.  I'm not a beach guy by nature, since the sun's rays do not agree with my ginger skin, and I tend to avoid shirtless macho oafs blasting horrible music as their mating call.  However, this summer, not too long before my wife gave birth, we took a trip down to Asbury Park, and I immediately fell in love with the place.

Being a big Bruce Springsteen fan, I was predisposed to liking this faded town, which was the setting for his early songs.  I am also a fan of spaces that were once grandiose but have fallen on hard times, and Asbury Park, despite its recent comeback, certainly fits the bill. 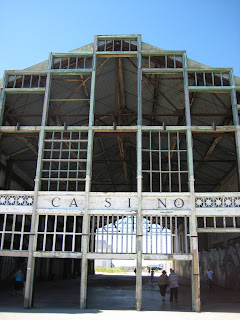 The old casino has been gutted, the beautiful sculptural details on the walls remain, with a shifting lineup of contemporary murals below. 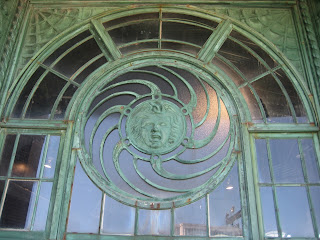 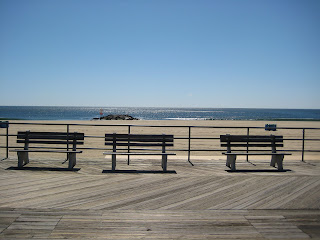 The old carousel building, with its wrought-copper now greened, still stands, but the carousel itself was sold off to someone in the Sun Belt.  A better metaphor may not exist for the industrial decline in towns like Asbury Park.


When you go to Asbury Park, not only do you get to see beautiful ruins, you also get a gorgeous view of the ocean without the crowds, awful music, or shirtless yobbos.  (And if you do come across them, they are more likely than not to be gay.)  In this environment, without all of the distractions, the pure, awesome power of the churning ocean is revealed, an experience that this son of the plains finds alternately alien and exhilarating.

Less than a week later after our trip, my wife gave birth to our twin girls.  When we were able to take them on a road trip, our first adventure was to Asbury Park.  Sitting with them and my wife on the benches on the boardwalk, while looking out on the limitless ocean sea before us and the low-key bustle of the boardwalk behind us was one of those rare moments of complete peace and contentment that we experience so seldom in our short lives.  Tonight, as a storm fueled by the mighty ocean's wrath bears down on this special and unique place, I hope you'll say a prayer for it.
Posted by Werner Herzog's Bear at 7:36 PM

I hope you, your family, and the Jersey coast are better today than the weather reports suggest.