With the arrival of twins to the Bear household, I am coming to grips with the fact that there's going to have to be some belt-tightening around here.  Since I spent over a decade in the genteel poverty of grad school and the peon grade of the professoriate, I am well versed in the art of having a good time on just a dime.  Here are my favorite low-budget pleasures in regards to food and drink, please use the comments section to enlighten me on those I've missed.

If Karl Marx were alive and amongst us today, he would say that cheap junk food, not religion, is the opiate of the masses.  People are willing to passively accept warrantless spying by their government, drug tests from their employers, and surveillance cameras on any corner, but will get up in arms if you dare restrict their right to giant containers of sugary soda.  Our whole agricultural policy seems designed specifically to create a mountain of cheap cheese puffs and potato chips to keep the proletariat distracted and happy.  Of all of the low-priced gut bombs out there, I have a special spot in my heart for snack cakes, Little Debbie brand in particular.  My parents are skin-flints of the highest order, which meant our pantry was always full of Zebra Cakes, Star Crunches and Oatmeal Pies, all of which used to come for less than a dollar a box.  I used to love visiting a friend's house back in the day, since his mom always seemed to have vanilla Zingers on hand, which are a Twinky-like cake with frosting on the top, which is as decadent as it gets for a ten year old child.  These days, thanks to my wife's influence, Ring Dings have become my favorite.

Sometimes you need a little savory with your sweet, and pork rinds have never done me wrong.  I still remember the first time I had them; my grandparents brought a bag over to our house as an afterthought along with my grandma's usual trunk full of homemade pies and casseroles.  I thought they'd taste like potato chips, and was pleasantly surprised by the flavor.  The fact that I was eating the fried skin of a dead animal only made them that much cooler in my little boy mind. 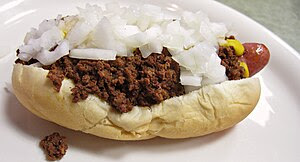 The invention of the hot dog is proof, more so than the light bulb, personal computer and assembly line, that this country once harbored genius.  I consider myself a bit of a connoisseur of the frankfurter, and have sampled my share of exceptional examples of the form.  My favorite genre is still the Chicago-style Vienna dog, for all of its ostentation and frummery.  Running a close second is the Michigan appropriation of the Coney dog (the secret is organ meat in the chili sauce.)  When I lived in Michigan I would sample something from time to time called a Flint dog, which was covered in spiced ground meat of unknown provenance.  In these parts when I want to bite into a truly epic dog, I go to Rutt's Hutt in Clifton and have one of their deep-fried "rippers."  If anything will kill me, it's this.

I love a good beer more than just about anything in the world, but even though my palette might be microbrew, my wallet is often Pabst Blue Ribbon.  When I lived with my buddy Dave in Chicago, we used to buy thirty-can cubes of Miller High Life for eleven bucks, a purchase I dubbed "instant party."  High Life might not be full of great taste, but it does go down nice and easy, which is more than I can say for Keystone, Busch, or Milwaukee's Best.  At our neighborhood bar I would be reduced at times to ordering Stroh's, which is a brew best to be avoided.  Finding a cheap beer that does not taste like iron filings is a difficult art, which is why I was lucky enough recently to make the acquaintance of Genesee Beer.  I purchased a tall-boy can for the princely sum of ninety-nine cents on a whim, since it seemed to have the most plain can I'd ever seen.  The good folks at Genesee appear to have put their money in the beer rather than the packaging, which is more than can be said for Budweiser.

I do love a taste of Kentucky gold, but if necessary, I'll settle for some Kentucky sludge.  That's why they invented Coca-Cola, right?  My favorite bourbon in this regard is Evan Williams, which should not be drunk straight unless you want to see vapor trails.  However, mixed with coke, it takes on positively sublime properties.

Of the many things I like about New Jersey, its diners are close to the top of the list.  Diners seem to be in decline across America; my favorite greasy spoon in Illinois closed while I was there, as did a similar place in my old Michigan 'hood.  Here in the Garden State, thankfully they're still going strong, with the added benefit of having items like pork roll and mazto ball soup on the menu.  Whenever I'm feeling low or in need of some culinary comfort, my friends at the diner always have the pancakes or meat loaf that will kill my unhappy thoughts with a food coma.  When I was a pathetic lonely bachelor in Michigan, nothing made me feel more at home than my weekly trip to my local diner for breakfast on Saturday, chatting with the waiters and the other regulars at the counter. Strangely enough, a trip to a diner played an important role in the early stages of my relationship with me wife.  Now that I've got babies, they enjoy the constant background diner noise of errant conversation, waitresses taking orders, and clattering silverware, so I guess things have come full circle.
Posted by Werner Herzog's Bear at 6:34 PM

This is great. I SO want some "Kentucky sludge" right now! On the other hand, I felt compelled to give up Little Debbie at age 30. I went cold turkey and I've never looked back. I bought my last box in December 2009. Fudge rounds were always my favorites, but Oatmeal Pies were in heavy LD rotation, too. Finally, I should note that like many other cardiac-inducing treats (Moon Pies, Goo Goo Clusters), Little Debbie originated in Tennessee.

Crap, I forgot to mention Moon Pies! I always grabbed one on my Southern road trips.