The Many Frustrations and Small Pleasures of Commuting Through Penn Station

This week my job began again after the summer break, so I have been making my morning rail commute from Newark to New York City after a long hiatus.  This means the twice daily slog through Penn Station, a place I have grown to know intimately, and to dislike with the intensity that only familiarity can understand.

It is a perpetually busy place, the most patronized train station in the United States, servicing hundreds of thousands of passengers every day.  You wouldn't know such a thing approaching it on foot in midtown Manhattan, since the station sits underneath Madison Square Garden, like an afterthought.  The original Penn Station, built around a century ago, was a grandiose, gorgeous marble colossus, a kind of pilgrimage cathedral for those coming into New York City for the first time.  In one of the most heinous crimes against taste and historical architecture every committed, the station was demolished in the early 1960s to make way for the current multi-use site, the kind of postwar all-purpose space that manages to do several things wrong at the same time. 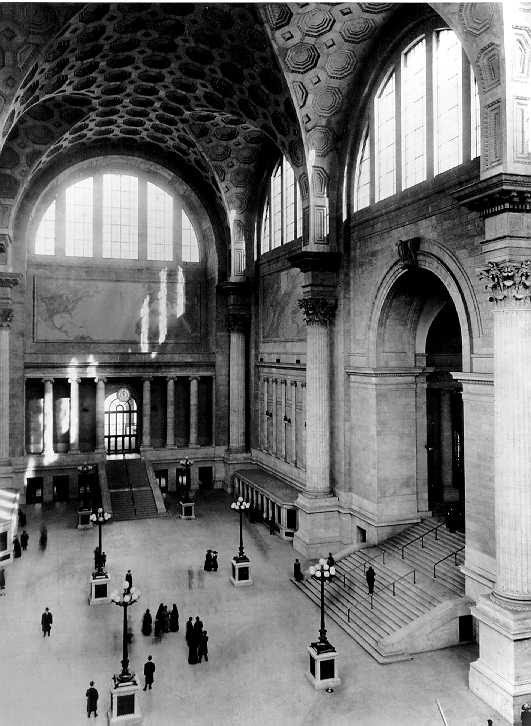 In the main Amtrak area they have put up photographs of the old station (like the one above) in all of its glory, which mock the modern-day traveler and commuter, surrounded as s/he is by the functionalist dystopia of the current station.

Today the most important train station in the nation's biggest city is effectively Madison Square Garden's basement.  Like a lot of basements, it's grungy and lacking in charm.  It's also laid out in a highly haphazard fashion, which I learned the hard way, since I have to get from one station to the other in order to transfer from my train from New Jersey onto the 123 subway line.  The most obvious path from one to the other is the main promenade, which is usually so crowded that it takes forever to fight through the masses on my way to the subway.  (More on the promenade in a second.)  I tried to find a different path, and soon discovered that I could avoid the crowds by winding my way through low-ceilinged corridors that run through past the Long Island Railroad terminals.  There's lots of exposed pipe and air conditioning vents with a fearsome amount of lint waving from them.  The floors in these pathways look like they haven't been cleaned since the Ford administration.  I have seen dried puke so old it was calcified on more than one occasion.  In the winter time homeless people bed down on these same floors, and I often have to be careful not to step on them.

However, once I finally complete the journey to other end of the station, I do at least get to see some surreal sites.  Sitting right next to the subway turnstiles is a fancy raw bar in what must be the most incongruous location possible.  I have long wanted to have a meal there, wondering who else would stop for fancy dining at the end of a dingy corridor that most of the shlubs who use Penn Station are unaware of.  Also, standing right there, are people hawking the local free papers (Morning Metro and AM New York), which are mostly made up of advertisements for things like treatments for vericose veins.

As much as I dislike my slog through Penn Station, I felt a little sad this morning because the guy usually handing out AM New York wasn't there today.  I loved seeing him because he really went after his job with gusto, bellowing out "AM New York, read all about it, AM New York!" in a tough Noo Yawk accent that made his words sound almost like a threat.  I don't know if he got paid extra for handing out a higher number of papers, but I wouldn't be surprised if he was the best selling vender in the city.  Hopefully he's found better employment, or gets to hawk papers in a spot with more air and light.

When I come back to Penn Station after work, I play a little game I call "Subway Olympics." I try to position myself so that I jump on the right car where I get on at 72nd street, and find a spot by the door so that when it opens I jump out first and am within steps of the stairs leading down off of the platform.  I then dash down the stairs as fast as I can, take a sharp left turn, and jet through the turnstiles like a runner hitting the finish line.  Others seem to have the same idea, I've only won gold a handful of times.

When I go home at the end of the day I usually just walk down the main tunnel of the station to the New Jersey Transit terminal, rather than negotiating the corridors, which are much more crowded in the late afternoon, making them unbearably stuffy.  Right where I get off the subway there are usually musicians playing with amps, and often surprisingly poorly for having the best busking location in the city.  I also must dodge oncoming commuters, get around slow-moving tourists, and generally hustle in order to get to my train on time.  As I do, I pass through one of the more surreal shopping and dining experiences this world has to offer.  There are several little bakeries, one of which actually sells some tasty empanadas (I was really hungry late at night one time.)  There are all manner of convenience stores, many of which have big tubs of ice out front spilling over with tall boy cans of beer.  When I look closely at my fellow passengers on a commuter train home, I will see a few of them discreetly sipping these from brown bags.

Amidst the smaller stores sits a K Mart, just the retailer you'd expect to find in a dingy underground train station.  There's also the usual and unusual fast food.  You can grab grub at McDonald's and KFC, of course, but also Nathan's Hot Dogs and Tim Horton's.  (The latter is a personal favorite of mine from my trips to Canada.)  All that food attracts more than people, of course.  I'll never forget seeing a dead rat splayed out on the steps leading from the Amtrak terminal to the main tunnel, right around the corner from the Auntie Ann's where I sometimes grab a pretzel for the ride home.

In a few weeks, once I make the commute more regularly again, I'm sure my eyes will get less sharp and my senses numb.  I might not see the dried vomit, dead rats, and brown bags anymore.  I won't smell the stale sweat of tightly packed human bodies, or the sweet scent of fresh croissants, either.  That blase insensitivity is the price Manhattan extracts for the exhilaration of its endless spectacle.
Posted by Werner Herzog's Bear at 3:58 PM