"Oh No Love, You're Not Alone": My David Bowie Years, part one

When it comes to music, I tend to go on binges once I discover a great artist or sub-genre for the first time.  Two years ago I spent several months listening to nothing besides Fela Kuti and Kraftwerk.  More recently I have been spinning sixties folk like it's going out of style.  However, no musical jag lasted as long as my immersion into David Bowie.  From January of 1997 to an indeterminate time in early 2000, there wasn't a week that went by when I did not spin an album by the Thin White Duke.  During the most intense periods I listened to at least one Bowie album a day, usually more.  This weekend I heard that he turned the impossible age of 65, which inspired me to dig back into his catalog, which I have rather neglected over the last decade.  The experience has been strange, since listening to Bowie takes me back to a rather tumultuous period in my life.  In the spirit of appreciation and of my usual navel gazing, I thought I'd order by Bowie albums by when I bought them, to the best that my aging brain can recall, and relate the life circumstances that surrounded them. 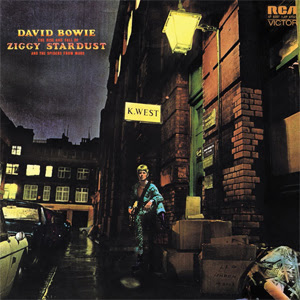 Ziggy Stardust and the Spiders from Mars
I have no doubts of my memory on this one.  I bought it on an absolutely freezing cold January night in Omaha at The Antiquarium.  This now defunct institution in the Old Market was the ultimate pop-culture junk shop, an old musty building with a huge array of used books and a record store in the basement.  (At least the record store has relocated, it's where I got my copy of Autobahn on vinyl.  If you're in the Big O, check it out.)  It was the kind of cold where the molecules in the air seemed completely immobile, and several minutes after getting inside of my apartment while I took the CD out of its case and put it on the boom box (I never had a stereo until very recently) my face still hadn't quite thawed.  (Amazing that I can't remember what I ate for breakfast this morning, but that I recall so many details of this night.)  It was in college, and my roommate was out of town, so I enjoyed this album by myself in a kind of private communion.  I'd known Bowie's music for years, of course, and had been meaning to delve in.  I was pretty happy to find Ziggy in the used CD bin, which I had intended to buy based on my enjoyment of hearing "Suffragette City" and "Rebel Rebel" blaring on the classic rock radio when I worked factory jobs during my summers.

To be honest, it took awhile for this one to sink in.  On Bowie's early albums, he sings too much from his throat, and it can come across rather strained and shrill.  The rockers like "Suffragette City" and "Ziggy Stardust" sunk their hooks in first, followed by "Starman" and "Moonage Daydream."  (To this day I really don't like "Five Years" all that much.)  Once Ziggy broke through my consciousness it became the soundtrack to my spring semester of my junior year of college, which also happened to coincide with one of my worst depressive episodes.  Looking back from my current standpoint of happiness and contentment, it becomes more obvious to me that I probably should have gotten some treatment for my dark turns in my youth.  I also happened to get a horrible case of bronchitis that winter, and I have vivid memories of spending Valentine's Day watching TV with a bottle of rum and a wicked, phlegmy cough that one of my friends said would harken my arrival in those days.

Changesbowie
Back in those late 90s days my little Mazda had a tape deck but no CD player.  Occasionally I'd troll bargain bins and box stores for cheap tapes to play in my car.  This greatest hits comp fit the bill perfectly, and I remember it most clearly as the soundtrack to a summer road trip to visit a friend of mine down in Kansas City.  The summer of 1997 had to be the worst of my life; I got my heart broke, and worked a soul-sucking telemarketing job during the day and dirty factory job in the evening mostly to forget about how miserable I was.  (I cringe when I see pictures of myself from back then, thick around the middle and sporting an unkempt beard. Very un-Bowie.)  "Heroes" quickly became my favorite track, with its shimmering beauty and heart-rending story.  I decided to pick up that album next.

"Heroes"
I bought this album at a used record store in Evanston, Illinois, in October of 1997 on an otherwise shitty day.  My friend L. and I trekked to Chicago during our fall break to spend time with her sister in Humboldt Park.  L's sis matriculated as a grad student at Northwestern, and I was interested in applying there for grad school myself, in history.

Folks, I am about to relate to you one of the most humiliating moments of my life, one that I have told few people about since it's so embarrassing.

At the time I had little clue what grad school meant, and I made the fateful and idiotic decision to drop into the history department at Northwestern while we were on campus and ask if I could talk to a prof there about their grad program.  At that time I didn't even know if I wanted to be a modernist or early-modernist, I had a very unsophisticated understanding of the field, and the prof who they sent me to see (who must have been pissed to be interrupted in his office hours by the likes of me) was not impressed.  He flat told me not to pursue a career in history, and even went so far to say that my being a white male was too much of a handicap, in any case, to get a decent job in the field.  With hindsight I know that he belonged to a certain class of reactionary silverback prof, but at the time I was crushed by his words and angered by his old white man racial and gender resentments.  I won't lie, I cried.  Soon after I drowned my sorrows, as I often do, with a trip to the record store, where I got both this album and Elvis Costello's Trust used.  (Not a bad combo!)  "Heroes" had always intrigued me for its cover alone, so evocative of Bowie's charismatic, mysterious cool.

The very night that I returned from my trip to Chicago, I made out in my room with a female friend who very quickly became my first girlfriend.  (Yep, being a painfully introspective guy with crazy facial hair who cried in public didn't exactly make me a chick magnet up to that point.)  We shared the same musical tastes, and would listen to this album together, its stark tones and claustrophobic feel wasted on a 22 year old me lost in the giddiness of first love.

My Bowie interest only grew from that point, but I'll leave that story for the next installment.

Thanks for this piece, man. It hit close to home on a lot of levels.