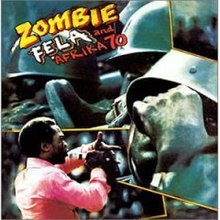 I can still remember the first time I listened to Fela Kuti. It was as if Miles Davis and James Brown had somehow been combined into one amazing, flowing, eternal music. I remember preaching the gospel of Fela Kuti, playing his music to anyone who'd never heard it.

Beyond the polyrhythmic, jazzy ecstasy of his music, Kuti was one of those very rare artists who wrote political songs that actually worked and didn't collapse under the weight of their own intention. (Bono and Jill Stein can provide some examples of the other variety.) His albums consisted of side-long jams, and "Zombie" is one of the best, both musically and lyrically. The groove is, as usual, irresistible and otherworldly, driven by a frantic rhythm guitar.

The song is directed at the soldiers of Nigeria's army, portraying them as mindless zombies following orders to kill innocent people. At one point he shouts out orders like a drill sergeant on the parade ground, with Africa 70's beat getting much more martial. The army didn't take kindly to this taunting, and attacked his commune, beating Fela Kuti and fatally injuring his mother. There's nothing that puts those with an authoritarian personality in a blind, violent rage more than questioning their blind obedience. (Exhibit A: the reaction to Colin Kaepernick.)

I've been thinking of this song this week, where so many crowds have thrilled to the words of an authoritarian who happens to be getting prominent support from police unions. Many zombies in their ranks have killed innocent people without remorse. If Trump were less of a buffoon he may well have been capable of using his zombie army to take power by force in a contested election. The story's not over yet, of course. And those zombies will still be around, still holding guns in their hands.
Posted by Werner Herzog's Bear at 4:50 PM

Email ThisBlogThis!Share to TwitterShare to FacebookShare to Pinterest
Labels: music, politics, track of the week