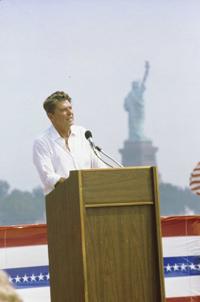 Rick Perlstein's fourth volume of his epic history of the conservative movement filled me with more anticipation than anything I've waited for since Return of the Jedi when I was seven. After a month of savoring it, I finished the book last night. As is usually the case when I complete a very long but very good book, I am feeling a sense of loss.

Reaganland lived up to my expectations, even if the end felt less grand than it deserved and less impactful than Perlstein is capable of. Still, he showed how sixteen years after Barry Goldwater went down in flames, one of his disciples would be elected president.

I knew a lot of the story already (I have been working on a project related to the 1970s for almost ten years now), but certain things brought new light to the narrative. Perstein's focus on what he calls the "boardroom Jacobins" illuminates how the popular push for consumer reform spurred by Ralph Nader ended in corporate regulatory capture. To understand Reagan's rise to power, he dug into his columns, radio spots, and speeches on the "mashed potato circuit." This compelling analysis showed how Reagan honed his abilities as a speaker and built a strong base well before running for president.

Although Perlstein is a leftist, he is more than willing to credit Reagan's rhetorical gifts. What kept coming through, more than I had thought already, was Reagan's ignorance and penchant for fabulism, as well as his ability as a speaker. As Perlstein shows, he often improved upon the work of his speechwriters. At the same time, Reagan came across as an exceptionally shallow person uninterested in knowing much of the world. He struck me as having George W Bush's lack of curiosity, but far more adroit at communicating. Reagan likewise had Trump's obsession with nationalism, but a flair that broadened his coalition instead of narrowed it.

Perlstein gets at something that I have been harping about for years: nationalism is an exceptionally strong force in American politics. Most Americans did not and still do not buy into supply side economics, no matter what the conservative movement types say. Reagan was able to tap into nationalist resentments post Vietnam, such as in his opposition to the Panama Canal treaty. The Iran Hostage Crisis also helped him in this regard. He sold national renewal, and many people were buying, including traditional Democrats. Barack Obama rose to power by projecting a positive kind of nationalism, and woe to Democrats and others on the left if that can't construct a narrative of the nation.

It wasn't just nationalist resentment driving Reagan, however. He tapped into racial resentment as well. Often Perlstein quietly comments on how much Reagan and other conservatives praised apartheid South Africa and white-ruled Rhodesia. Reagan's "welfare queen" stuff is well known, but Perlstein ties it into a general growing wave of white grievance at the time. The economic downturn of late 70s made it even less likely for the white middle class to support sharing more of the pie, and Reagan's "anti-government" rhetoric implied that "the government" was anything that helped Black people.

Despite this, Reagan managed to build a broader coalition. He said kind things about undocumented immigrants, and sought to bring people of color into the tent. His promise of national renewal drew in plenty of Democrats. Modern day Republicans could learn a thing or two from this approach.

There's a lot that modern Democrats can learn as well. Carter suffered because he became obsessed with austerity and inflation, allowing Reagan to play "Santa Claus" with tax cuts. He was right that the country needed to wean itself off of fossil fuels, but clothing that mission in language of limits and privations made it political unpalatable. His moralism and his technocracy were his undoing. Democrats trying to get ahead by making concessions to conservative austerity only destroy their chances.

Last but not least, I loved how Perlstein weaved in references to Joe Biden in his narrative. Even then he occupied the dead center of the Democratic Party. Time will tell if he is capable of moving in a more progressive direction.