When I first started listening to popular music in a serious way (around 1983) I was drawn to movie soundtracks, which were hitting the apex of their popularity during that era.  Perhaps inspired by the runaway success of the Saturday Night Fever soundtrack, studios and record labels collaborated to create some real blockbuster soundtracks in the 1980s.  Much of it likely had to do with the fact that young pop music listeners were, have been, and always will be less interested in albums than in hit singles.  ( I know I was in that camp.  Why buy an album with one good song and a bunch of filler when you could get a soundtrack full of wall-to-wall hits?)  There's a reason why young listeners download by song rather than by album, and it's not just the new digital medium.  They want the hits, dammit, and in the 1980s, the hits were lurking in the grooves of movie soundtracks rather than iTunes.  Here is a list of the 80s movie soundtrack music that I find to be most most representative.

Flashdance
This is the one that really started it all and managed to combine two disparate trends of the 1980s: shoulder-baring sweaters and deindustrialization.  The title song, "Flashdance (What a Feeling)" by Irene Cara, warmed us against the cold of a world built of steel, built of stone and "Maniac" by Michael Sembello took a song intended for a slasher movie and converted it into a dance floor classic. 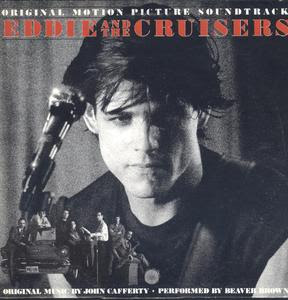 Eddie and the Cruisers
For some reason there was a whole genre of movies about small-time rock n' roll bands trying to make it good, like Light of Day and Satisfaction.  The best music came from one such film that did not star a member of the Family Ties cast (like the other two): Eddie and the Cruisers. "On the Dark Side" still holds up as far as I'm concerned.

Ghostbusters
I go this one on cassette for my ninth birthday in 1984, and I couldn't have been happier.  Most of the tracks are pure second-rate 80s rock, but Ray Parker Jr.'s title track is one of the best distillations of 80s processed cheese catchy pop that decade managed to produce. 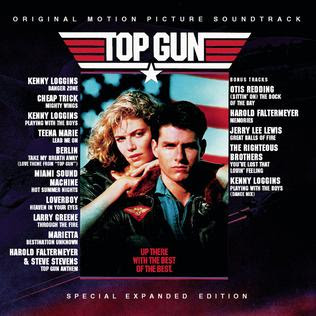 Top Gun
Nothing sold in the 1980s like empty nationalism.  Trying to forget the embarrassment of Vietnam and not yet disillusioned by the coming "war on terror," America avidly consumed images of triumph and victory over the commies, whether it be Rambo or Maverick.  Like any propaganda film, Top Gun needed inspiring music.  "Danger Zone" by Kenny Loggins adequately set the scene with its taut rhythms and pounding electro-bass drums, while "Take My Breath Away" by Berlin wrapped it all in gauzily irresistible synths.  This soundtrack also happens to be the first thing I ever bought at a Wal-Mart.

Footloose
Kenny Loggins really was the king of 80s soundtracks, wasn't he?  Even his song from the Sly Stallone truck driving/arm wrestling movie Over the Top, "Meet Me Half Way."  It all started with "Footloose," a silly, stupid yet fun hit single that burned up the charts in the summer of '84.  But that's not all.  There's Jim Steinman at his mock operatic best producing and writing the frantic, "Holding Out For a Hero" sung by Bonnie Tyler.  "Let's Hear It For the Boy" by Deniece Williams is a nice sugary pop-soul soufflé, and rockers  Mike Reno (of Loverboy) and Ann Wilson (of Heart) combined for the ballad "Almost Paradise," which might have set a record at the time for the song most often used as the background of a backseat teenaged heavy petting session.

Various Madonna soundtrack tracks
Desperately Seeking Susan was one of many failed attempts to turn Madonna into a movie star, but it did give us "Into the Groove," showing off her club-music roots.  (I liked her best when she was doing nouveau disco instead of getting all pretentious.)  The video also made young me very, very happy.  "Crazy For You" from Vision Quest was perhaps her best ballad of the time, and "Who's That Girl" from the forgettable film of the same name had a cool, minor-key vibe. 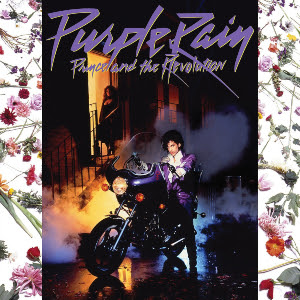 Purple Rain
I know this is sort of cheating because the album well overshadowed the film, but I would be remiss to exclude it.  Purple Rain turned Prince from a star to a super-duper star, and deservedly so.  As a kid "Let's Go Crazy" was one of my favorite songs to run around the basement to, not least because of the Hendrix-esque guitar freakout at the end, which was probably the edgiest thing they allowed on Top 40 radio in 1984.  "When Doves Cry" dominated the charts the same year, amazing for a song with such Oedipal overtones and darkness.
Posted by Werner Herzog's Bear at 5:57 PM

What a sonic catalog for reliving the 80s as a teen (granted, I'd rather be stabbed than relive my teens). Flashdance defined a look (including hair!) for a generation. Although, somehow, everyone got JB's look wrong along the way. I was listening to the comedian Bill Burr and he said what I'd been thinking for a long time: "The 80s were a disaster...EVERYONE looks like crap in pictures from the time." So true, so true. NOTHING redeeming about looks from the era. We all DID look like crap. That cannot be said for preceding decades (jury's still out on 90s and subsequent years...although the 90s are looking pretty bad in retrospective, but not AS bad as the 80s).

Anyhow, I'm all for the hits, too. I can't tell you how much time I wasted waiting by the radio, ready to press "record." Always ended up with the recorded hit missing 5-10 seconds (sometimes crucial ones, huh?) or the overlapping DJ comments.

Thanks for the trip back in time (and, I must say, the bullies that haunted my teens prepared me for the bullies of academia...sad, but oh so true).